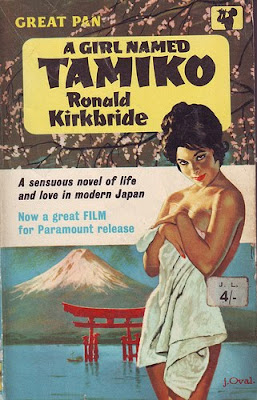 The US title for this book is 'A Girl Named Tamiko'.
The story centres around the central character Ivan Balin a photographer who has one goal in life and that is to get a visa so that he can live and work in America. He has crossed from mainland China, where he was born to a Chinese mother and a Russian father, to Japan.
At the opening of the book he is obsessive and a user. Obsessed with getting a visa and using a local bar girl, Eiko, and giving her the wrong impression. She kind of loves him and thinks that he'll take her with him which is the last thing on Ivan's mind.
Then he meets Fay Wilson the receptionist for the American Ambassador. She's spoilt, rich and hates everything Japanese. Ivan thinks that gives him a connection to her but then she hates his yellow skin. Sure they get it together but she's just using him.
On an off night he meets up with his English friend, Nigel, who introduces Ivan to Tamiko. She is the key to the archives in the library but it is a completely different door that she opens. Through her Ivan gets to photograph one of Japan's most influential modern artists who refuses to have his picture taken. Instead of outrage - it is the making of Ivan Balin's reputation as a photographer. He can't move for orders and it is by taking another photograph that he is given an assignment that takes him into the heart of Japan and two weeks with Tamiko that will change his attitude and his life.
Ronald Kirkbride brings life into his characters and through them gives an insight into post-war Japan. There is conflict with those, like Tamiko's brother, who want to stick with tradition and those who know that they need to embrace modern ideas if they are to compete on equal terms.
'Tamiko' is a fully satisfying read. It was first published by Cassel in 1959 and my edition was the 1960 publication from Pan Books. There is no waste in the 154 page length though believe me there are times when you feel like shouting at Ivan Balin to wake up to himself.
If you like this one then you might like Ronald Kirkbride's 'An Innocent Abroad' where a Japanese tomboy takes on modern America.
Posted by Ray at 01:29

Today must be the day of the luscious covers. I remember that movie, of course. Never put it together with a book though.

Fine review, Ray. This looks like a good cover for You Only Live Twice.

Yes, rather a regrettable film aside from being an early credit for the delightful France Nuyen, albeit her accent was as out of place as it would be in THE JOY LUCK CLUB (she certainly looked more her part than Laurence Harvey looked his). But I might well enjoy the novel...thanks.

Funny thing is I've never seen the movie - by the sound of things that must be a good thing.