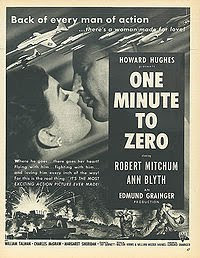 One of the most memorable movies made about the Korean War - and this year marks the 6oth Anniversary of the conflict that began at 04:00 on Sunday the 25th June 1950. A fact that is not lost on Pilot Col Joe Parker and Army Col Steve Janowski who liken the attack to Pearl Harbour where Parker says:"Isn't this where we came in?" and Steve replies "And it's Sunday, too."
The last time I saw this movie was back in the late Fifties or early Sixties but it stuck in my mind for it's realism.
Like most films there are the romantic moments between the leads but even that was different.
Steve Janowski, is in Seoul to train up the South Korean Army to prepare for the imminent invasion by the Communist north.
Linda Day is a United Nations nurse who has firm views and opposes the use of military force. Nor does she care about to whom she voices her opinion.
Despite their differences Steve and Linda do draw together - more so when he sheilds her from sniper fire.
Against her will Steve forces Linda to join a flight to Japan but as the plane takes off the airfield is bombed by the North Koreans - hence the reference to Pearl Harbour.
At the front - well it is crumbling - Steve takes command of a unit that has lost it's officers and is wounded. He is flown out to Japan where he is re-united with Linda.
Both return to Korea where he links up with his unit and Linda deals with concerns of the flood of refugeees. However, amongst the refugees are North Korean soldiers. These are spotted by Joe Parker as he flies above them. Armed with this information Steve orders his men to fire over the heads of the refugees. This tactic does not have the required effect of drawing the enemy out so Steve orders down artillery fire. Unaware of the reason why, Linda witnessess what seems to be a massacre of the refugees - unaware that amongst the casualties are enemy troops.
With this relationship over Steve heads north with his troops to block an enemy supply line. Before long they are surrounded by the enemy and low on ammo. Joe Parker flies in extra supplies during which he is shot down and killed. But not before he has told Linda about the shelling of the refugees.
Steve survives the battle and reconciles with Linda before going off to the next battle.
What is impressive with the movie is the realism of the action scenes and with most of the dialogue. Some of it is cliched but for the most part reflective of attitudes of those on the ground and those at home.
The battle at the end has a kind of suspense to it as it takes place at night and until daylight you are not sure who lived and who died.
This movie also acknowledges the parts played by the British Army and the Royal Australian Air Force.
The music score for this movie was by Victor Young and includes the classic song 'When I Fall In Love' - a song forever associated with Nat 'King' Cole.
There has, so far, been no DVD release for this film. It did come out in the US on VHS.
Posted by Ray at 15:18