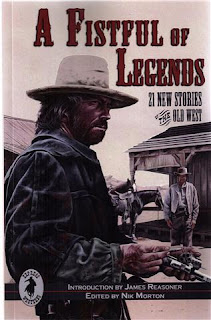 In the Afterword to this anthology of 21 new short stories Editor Nik Morton states " Every one of this latest selection of Old West tales for Express Westerns tells a story that drew me in. I wanted to know more; I wanted to find out what was going to happen next."
How very true that statement is.
From beginning to end there is a kind of continuity to these stories that do draw the reader in. From the opening pages where Jared Walker contemplates the lack of a future to the point where Hank Webb thinks on the prospects of his own at the end of the book - the reader is drawn into many lives and a history of a time.
These are the stories of the men, women and children who shaped the Old West. It is also about survival in those days with such stories that have characters with disabilities or the young prostitutes who survive each day until they try to escape.
Boundaries are pushed with these tales.
And, of course, no western is complete without a share of gunfights, robberies and a serial killer on the loose.
Some of the writers are new, some are old hands and some come in between and have written their first western. Yet the writing is of a standard that you cannot tell the difference.
This is one of the best anthologies of short stories that I have read in a long time.
Each story is individual yet produces a kaleidoscope of colour that illustrates how the west was won.

A FISTFUL OF LEGENDS is published by Express Westerns and will be on sale on the 31st January 2010 from either Lulu.com or via Amazon.
Until the 11th January 2010 there is a special offer available at - for the USA go to Davy Crockett's Almanack (http://davycrockettsalmanack.blogspot.com) or - for the UK and the Rest Of The World go to The Culbin Trail (http://ijparnham.blogspot.com)
Well worth having.
Posted by Ray at 16:43

Your review is right on, Ray - I started reading it a few days ago and couldn't agree more.

It's very exciting to be a part of this collection and to have James Reasoner do the intro is icing on the cake.

Nice review, Ray, and I agree. As I said in my own, I'm usually happy with an anthology if I like half the stories, but in this case I liked them all!

Thanks for the splendid review, Ray. Let's hope this book can help draw in new readers and writers to the genre.
Nik

Good review, Ray. Thanks for posting it.