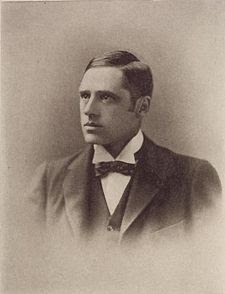 If you are Australian then you know who Banjo Paterson is.
Most people know, at least, one of his poems - maybe, two seeing as how one inspired a movie and a TV series.

Andrew Barton Paterson was born in 1864 at Narrambula nr Orange, New South Wales. Educated, first by a governess, he attended bush school in Binalong before going to Sydney Grammer School. On leaving school at the age of 16 he was taken on as an articled clerk with the solicitor's firm of Spain and Salway. In 1886 Paterson was admitted as a solitor and opened his own firm of Street and Paterson.
During these years he began writing poetry which he submitted to 'The Bulletin' and the 'Sydney Mail' under the pseudonyms of 'B' or 'The Banjo'.
His early poetry reflected his interest in horses and horseracing and reflections of his early life.
Banjo Paterson grew up at a time when the outback of Australia shared a time that could be compared with the Wild West of America. Cobb & Co stagecoaches, the gold fieldsand sheep took the place of cattle. Riverboats plied the Darling River carrying tons of wool many of which resembled the Mississippi riverboats. And Paterson's poetry is full of these pictures.
During these early years Banjo Paterson found himself involved in a competition that he did not want.
Three years after Paterson's birth so Edward Lawson was born. He came from a poor family and had only three weeks of formal education. An ear infection lead to total deafness but he loved to read the likes of Charles Dickens and Captain Marryatt. He, too, contributed poems to the same publications as Paterson.
Sydney society became divided. The well off supporting Paterson while others favoured Lawson. Only time has decided the issue.
In 1895 Banjo Paterson published a verse which has become symbolic of Australia - 'Waltzing Matilda' and a volume of verse titled 'The Man From Snowy River'. Titles that are still familiar today. 'The Man From Snowy River' sold out within a week of publication and continued to do so as four more editions were published over the next six months. The success of this volume made him second only to Rudyard Kipling in popularity among living poets.
Banjo Patterson became a war corresponent during the Boer War and Boxer Revolution in China. Although he went to France in World War One with the intention of covering the war he finished up working for the Australian Field Ambulance.
Banjo Paterson died in 1941 and his likeness has been on the Australian $10 note.
Couple of good books:
The Best Of Banjo Paterson (1996)
and there is a Penguin Classics collection of the works of Banjo Paterson.
Posted by Ray at 12:54