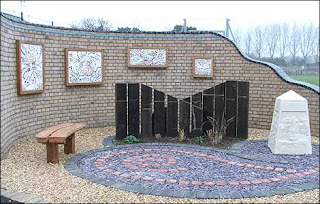 Walking along the beach at Felixstowe today and despite the stiff breeze and the rushing waves it is difficult to believe that 60 years ago it was a completely different pictures.
On the 31st January 1953 the combination of hurricane force winds from the north and a high spring tide produced an 18 foot storm surge that swept down the east coast of England at a high cost to life.

Of course, I was an eight year old kid when this happened and I lived miles away in North London totaly unaware of this tragedy. That was until my dad took me to see 'The Snows Of Kilimanjaro' at the local Odeon.

Normally, there would have been a 'B' movie but, instead, was a black and white newsreel that showed the devastation that this storm had brought to places like Hunstanton, Felixstowe and Canvey Island. The opening words: "We are sorry that you were woken in the early hours of the morning...." somehow have stuck with me over the years.

In Felixstowe alone 41 people died and thirteen of those were children. Not all of them were drowned, some died in their parents' arms trapped in the freezing cold weather shivering inside their pyjamas as they huddled together on the roofs of their homes.

Most of the homes were of the pre-fab design that were destroyed by the floodwaters and when you walk along Langer Road today you can only imagine what happened there.

But it was the suddeness of the storm - a policeman knocked on one door and told the occupants that they should get out but within seconds of waking their daughter they were fighting the floodwaters to escape their home and climb to the roof.

I can only imagine that it was as sudden as the tsunami that hit Thailand - but even so after 60 years I can recall the images that I saw in the cinema.

Today a memorial (pictured above) stands at the junction of Langer Road and Beach Station Road - the blue line at the top of the wall shows the height of the floodwaters.

Although there are walls and new sea defences there now I doubt that they could halt another eighteen foot surge. On the other hand there appears to be an early warning system in place to evacuate the area if needs be.

The sea is a force that can never be underestimated.

Sounds similar to hurricane Sandy that hit the East Coast of the U.S. last year. That's a nice memorial.

Living in the mountains of Wyoming I cannot imagine living near the sea. Storms don't come up near so quickly here.
Just found your blog and looked back through some older posts.

You could be right there, Oscar. Those images gave me a fear of water - five years later I overcame that fear when the place we had moved to was flooded.

Neil - thank you for finding my blog.