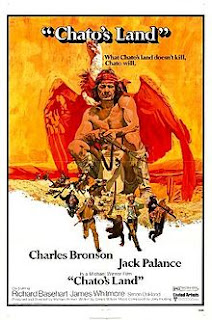 The late Michael Winner directed Charles Bronson in this 1972 western.
At the time of release the film was panned by critics and, in my opinion, if I took them at their word would have missed out on a pretty good story.
Charles Bronson plays Pardon Chato, an Apache half-breed, who walks into a saloon to have a quiet drink. Sheriff Eli Saunders follows him in and orders Chato out. Much to the amusement of the saloon's only other customer and the bartender, Saunders takes up station behind the half-breed and draws his gun ready to backshoot Chato. Only Chato is ready and the Sheriff winds up as the corpse.

As Chato rides out of town, so the sole saloon customer rushes off to report what has happened to the harness and saddle maker, Quincey Whitmore (Jack Palance).  Whitmore, a former Confederate Captain takes command and rounds up a posse that includes Richard Basehart, Simon Oakland, Ralph Waite, Richard Jordan, William Watson and James Whitmore.
At first, Chato plays with the persuers by running off their horses and cutting their water bags while, all the time, leading them deeper into hostile territory.
Instead of being put off, the merry band of hunters push doggedly on until they come across Chato's home and rape his wife.
After he rescues his wife the tone of the story changes as the hunters now become, well and truly, the hunted.

While Bronson's Chato is more of a bit part who makes his prescence felt. Some of the later camera angles have the viewer searching the ridges for this elusive half-breed. It is the posse that holds the centre stage with Quincey Whitmore and Jubal Hooker (Simon Oakland) fighting for control.
Jack Palance's character has a depth that I doubt if anyone would have picked up in 1972 and it is when he talks about Chickamauga and still able to hear the screams of the wounded and dying that I realised that he was suffering from what we call 'post traumatic stress syndrome' - just something that is not associated with the western genre.

This film, in many ways, is far better today than it was back when first released - and, therefore, worth another look.
Posted by Ray at 12:51

I have a copy of this, your review has me wanting to dig it out again.