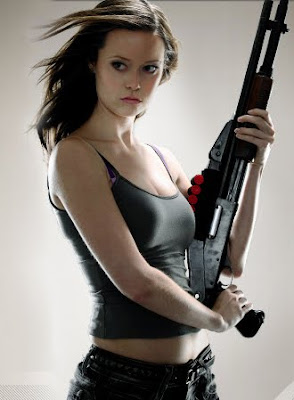 Arnold Schwarzenegger is the iconic Terminator.
At least that is what I thought until I watched both seasons of 'Terminator: The Sarah Connor Chronicles'.
It is not easy to top the original Terminator but Summer Glau as Cameron does do just that. I don't think that I have seen anyone of late who has that magical screen presence that Summer Glau brings to the role. Her actions are controlled and her face expressionless yet manages to convey so much that she commands attention and dominates her scenes even when she is just standing in the background.

Summer Glau was born in San Antonio, Texas back in 1981 and trained to be a ballerina until an accident ended that career. So she took to acting by appearing in an episode of 'Angel' as - a ballerina. As an actor she appeared in several episodes of 'The Unit' and 'The 4400' as well as playing River Tam in the series 'Firefly' and the movie follow up 'Serenity'. None of which I've seen.

As the Terminator, Cameron, Summer Glau has made the role her own and I hope that she gets the opportunity to reprise the role in a movie version.
Yet, Summer Glau, does have an ambition. With '3:10 To Yuma' as one of her favourite western movies she would love to play a role in a western movie. Hope she gets her wish.
Posted by Ray at 14:51

Yes, she is very good. You definitely need to watch Serenity. She seriously kicks backside in that. Happy New Year to you and yours. Jo

Thanks, Jo.
Just finished watching 'Serenity'. Different type of role but, as you say, she kicks ass alright.

This is a enormous show that expands on the Terminator cosmos. It dives spacious into the characters and helps give them life from what you saw and know about the show. This is a very interesting show, keep you guessing and with so many people Terminator fans, it has a large fan base. This is a show I look forward too every week.