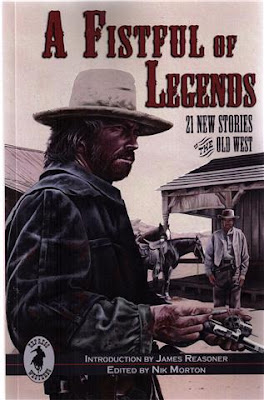 Following on from the success of the first anthology 'WHERE LEGENDS RIDE' Express Westerns are proud to announce the publication of a new anthology of 21 new western stories under the name 'A FISTFUL OF LEGENDS'.
'A FISTFUL OF LEGENDS' will be avilable to order via www.lulu.com or on-line retailers like Amazon from the 31st January 2010.
The 21 Stories are:
Dead Man Talking by Derek Rutherford
Billy by Lance Howard
Lonigan Must Die! by Ben Bridges
The Man Who Shot Garfield Delaney by I.J.Parnham
Half A Pig by Matthew P.Mayo
Bloodhound by C.Courtney Joyner
More Than Meets The Eye by Gillian F.Taylor
Big Enough by Chuck Tyrell
One Day In Liberty by Jack Giles
Shadows On The Horizon by Bobby Nash
On The Run by Alfred Wallon
The Gimp by Jack Martin
Visitors by Ross Morton
The Nighthawk by Michael D.George
The Pride Of The Crocketts by Evan Lewis
Darke Justice by Peter Avarillo
Angelo And The Strongbox by Cody Wells
Crib Girls by Kit Churchill
Man Of Iron by Chuck Tyrell
Cash Laramie And The Masked Devil by Edward A Grainger
Dead Man Walking by Lee Walker

Many of the writers in this new anthology are seasoned hands but there are some who are new comers to the western genre.
'A FISTFUL OF LEGENDS' rides a full range of stories that cover birth, life and death; from soiled doves to daring robberies and dangerous man hunts bringing the story of the west to life.
'A FISTFUL OF LEGENDS' was edited by Nik Morton with sub-editor Charles Whipple with an introduction by respected western writer James Reasoner.

Now for a limited period if anyone can't wait until the 31st January there are some pretty good deals around at the moment. These can be found at either Davy Crockett's Almanack (http://davycrockettsalmanack.blogspot.com) for folks in the US. For the UK and the Rest Of The World head on over to The Culbin Trail (http://ijparnham.blogspot.com). This is an offer not to be missed.

Facebook it. Twitter it. My Space it. Bebo it. Podcast it.
An anthology like 'A FISTFUL OF LEGENDS' needs to be celebrated for all 21 stories are BRAND NEW. Unique in a climate where caution and reprints abound.
Posted by Ray at 15:40