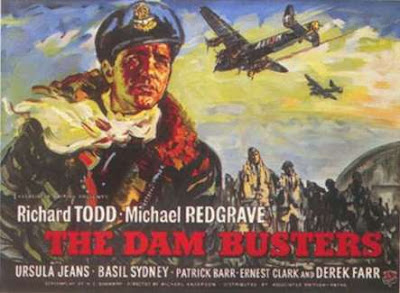 On the 3rd December 2009 the iconic British Actor, Richard Todd, died in his sleep at his home in Grantham, Lincolnshire.
During the Second World War the raid on the German dams was planned here and carried out by 617 Squadron known as The Dam Busters who were based at the Lincolnshire airfield at Scampton.
The squadron was led by Wing Commander Guy Gibson - a role that would always be associated with the actor, Richard Todd.
During World War 2, Captain Richard Todd parachuted into France and was one of the first men to step onto French soil at the opening of the Normandy invasion on the 6th June 1944. Capturing the Pegasus Bridge he held the position until the arrival of John Howard's glider borne troops.
In the movie 'The Longest Day' Richard Todd played the part of John Howard and found it weird to meet up with Captain Todd played by another actor.
Richard Todd made his movie debut in the film 'The Hasty Heart' but it is his military roles in such films as 'Danger Within', 'Yangtse Incident' and 'D-Day: The 6th June' that he is remembered. But he was versatile with portrayals in other films such as 'Robin Hood And His Merrie Men', 'Rob Roy'. 'The Boys' and 'The Big Sleep'.
Richard Todd was the first choice to play James Bond in 'Dr. No' but commitments elsewhere gave Sean Connery the part.
A talent that will be sadly missed.
Posted by Ray at 15:10

By all accounts he was a very nice man as well. A sad loss, but he did live a long life at least, unlike some of his comrades.

I am saddened by this. I've just been watching him in that DVD you sent.