SPARE THE ROD and MICHAEL CROFT 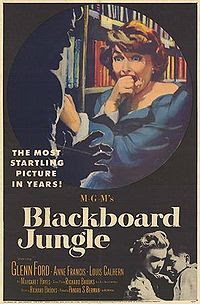 In March 2009 Alleyn's School in Dulwich, South London became the home of the Michael Croft Theatre named for a former Head of English who taught there until 1956.
Michael Croft was born in the East End of London in 1922 and taught in three schools before quitting to become the Founder and Director of the National Youth Theatre. Not so much a stage school but a project that would help young people between the ages of 13 and 21 in all aspects of drama.
At first, the National Youth Theatre was male dominated but by 1960 girls were added.
Over the years the theatre has helped the likes of Daniel Craig, Helen Mirren, Matt Lucas, David Walliams, Simon Ward, Derek Jacobi and news reporters, Kate Adie and Kurt Barling in the furtherance of their careers. Many taking their first steps on stage under the direction of Michael Croft.
All this stemmed from Michael Croft's own teaching experience.
Back in 1954 two books were published one far better known than the other.
The first was about the experiences of Salvatore Alberto Lombino's 17 days as a teacher at Bronx Vocational High School while the second was based on Michael Croft's
first hand knowledge.
Lombino quit teaching and found success with the publication, as Evan Hunter, of 'The Blackboard Jungle'. But this would have repercussions for Michael Crofts' novel 'Spare The Rod'.
In 1955, 'The Blackboard Jungle' became a massive film hit in America - not only for the subject matter but because of the pounding rock 'n' roll theme song 'Rock Around The Clock' by Bill Haley & The Comets.
When the film was shown in South London's Elephant & Castle the teenage audience went into riot mode - ripping up seats and dancing in the aisles. A pattern that that was repeated where ever it was shown.
To many historians it is this movie that marks the start of the teenage rebellions of the 20th Century.
The movie was banned at the Venice Film Festival.
So, when British film makers, impressed by Michael Croft's novel 'Spare The Rod', wanted to turn it into a film opposition came from many angles. No one in the UK wanted a British 'Blackboard Jungle'. High on the list of objectors were the Education Authorities, the (then) London County Council and the Teaching Unions.
Impressed by the book singer, comedian and actor Max Bygraves invested his life savings into the making of the movie. Even then, in 1960, there was still opposition as the LCC would not allow any of it's schools to be used for location shots for the fictional Worrell Street School.
Despite opposition the film was made and released in 1961.
Most descriptions of the film begin by either saying that it is about juvenile delinquency or as an anti-corporal punishment. The elements are there but it is about a time - and one that I can relate to. The teachers at Worrell Street School are both real and symbollic. Max Bygraves plays Alan Saunders, a man looking for a meaningful job as a teacher following demob from the navy. He wants to do what comes with the job description and teach. In the opposite corner is Arthur Gregory, an authoritorian bully who will use the slightest excuse to ridicule or cane a pupil.
In the middle is the trying to keep everybody happy headmaster, Jenkins, (played by Donald Pleascence).
The class is made up of children who cannot understand why they need an education. As one child says 'What's the point. Me old man don't read or write and he makes 28 quid workin' on the docks. Bet that's more than you earn, sir.' And that was a truism of the time. But Saunders does engage with the class - and when he does use the cane he hates it because he is taking his anger out on those who did not deserve it. Well, one did but that's beside the point.
Many of the points of both 'Spare The Rod' and 'The Blackboard Jungle' both as books and movies parallel each other and it is intriguing to think that two authors miles apart managed to acheive this at the same time.
Of course, when the film version of 'Spare The Rod' was released it was known as the British 'Blackboard Jungle'. Differant education systems and different schools - North Manual Trades High School vs Worrell Street School - oceans apart.
Teenage pupils stealing a van and joyriding; a drawer full of knives confiscated from pupils - 'Spare The Rod' could have been filmed today.
On the other hand 'The Blackboard Jungle' has many imitators - 'Dangerous Minds' or 'Sister Act' come immediately to mind.
The closest thing to 'Spare The Rod' is E.R.Braithwaite's 'To Sir, With Love'. Odd casting in the film version of the latter as it starred Sydney Poitier who appeared in 'The Blackboard Jungle'.
Of the two authors, Evan Hunter went on to be a bestselling author both under his own name and as Ed McBain creator of 87th Precinct and Matthew Hope.
Michael Croft went in a different direction and died of a heart attack in 1986.

Good stuff, Ray. And yeah, I never heard of 'Spare the Rod' here in the States. Maybe what it needed was the musical stylings of the proto-Stones band Little Boy Blue and the Blue Boys.

"Spare the Rod" was unusual, or maybe even unique, at the time in showing corporal punishment in a working-class school. Nearly all other such films were set in private boarding schools (Housemaster, Yank at Eton, The Guinea Pig, Goodbye Mr Chips, The French Mistress, etc.).
Unfortunately "Spare the Rod" has contributed to an enduring myth, viz. that state schools only caned on the hand. In fact the great majority of boys' state secondary schools (and quite a lot of mixed ones) caned on the bottom, just like in private schools.

c - I'm with you there. Cane or slipper it was usually on the backside. Though my headmaster and the geography teacher caned on the hand. Easier to run hands than the backside under the cold tap.

I remember this well. My favorite "teacher" film is TO SIR WITH LOVE though. I don't think parents should hit a child-but especially not a teacher who has no love to balance the disciplinary aspect.