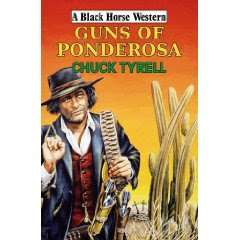 THE STORY WITH NO NAME
Part 14 can be found at Davy Crockett's Almanack (http://davycrockettsalmanack.blogspot.com)
You will find all the links to the previous episodes there as well.
The story is open to anyone who wants to join in though part 15 is in the hands of western writer Jim Griffin.
CHUCK TYRELL
One of the contrtibutors to 'The Story With No Name' and the forthcoming anthology 'A Fistful Of Legends' Chuck Tyrell has announced the publication of a long awaited new western novel 'Guns Of Ponderosa' will be released in February, 2010. This will be published by Robert Hale's Black Horse Western range.
Pre-orders can be taken at The Book Depository who delivers free worldwide.
CALEB THORN
Over on Open Range blog there is a review of the first book in the Caleb Thorn novels.
This short lived series was written by Piccadilly Cowboy writer L.J.Coburn.
Link: (http://jacksopenrange.blogspot.com)
Posted by Ray at 13:54