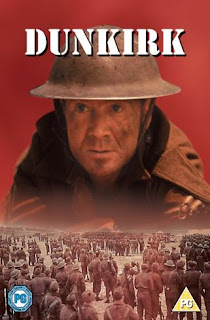 This movie, directed by Leslie Norman, was released back in 1958.
It stars John Mills as Corporal 'Tubby' Binns.
Bernard Lee as Charles Foreman
Richard Attenbough as Holden
The film is a combination of Ewan Butler and J.S.Bradford's book 'Dunkirk' and Elleston Trevor's 'The Big Pick-Up'.
The film's subject is the evacuation of the British troops from the beaches of Dunkirk in May, 1940.
Binns and his group are cut off their lines highlighting the confusion of the times. Their officer has been killed and Binns has to decide what to do next. When he asks his best mate, Mike, what they should do he is reminded that he is the one who has the stripes. Binns response is that he didn't want them to which Mike responds that Binns has them and he has to take charge.
As the film progresses Binns comes to terms that he has the rank and takes on the burden of getting his men back to the ever decreasing British lines.
And even a place of safety is not what it seems when they link up with an isolated artillery battery which is bombed by Stukas. Nor is their help needed when they come across refugees cramming a main road and can only stand by and watch as the road is strafed by German fighters.
What is happening in France is not known across the Channel in England. Cynical journalist, Charles Foreman, writes optimistic pieces in his newspaper to prop up morale. Reality strikes when the Navy turn up and commandeer his motorboat. Protesting the Navy allows him to take his boat to Ramsgate where the stark reality of the situation hits him.
Along with him is the village's mechanic, Holden, a timid man who finds himself caught up in the whole thing. He would rather go home to his wife and new born baby.
After several arguements Foreman and Holden along with other boat owners are given permission to take their boats to France and the saga of 'the little ships' begins.
Holden is no hero but is indicative of the kind of people who took huge risks to acheive the evacuation.
Towards the end of the film the two stories merge when Foreman's boat develops a fault. He and Binns meet up on the beaches just before they are bombed during a church service. Holden fixes the fault and takes Binns and his men on board.
'Dunkirk' is possibly one of the best war movies ever made. There are no heroics; no banner waving; no limbs flying off - just a stark realism that tells the story of the evacuation of Dunkirk.
It is a story of men who did what had to be done at the time.
Posted by Ray at 16:23

I watched this recently - it was a freebie with the newspaper - and I thought it was brilliant. At times almost documentary like. Great review Ray - I'd like to see your thoughts on more classic war movies.

Thanks, Gary.
As November is Armistice month there will be 3 more. Navy, Air Force and an escape movie coming up.

I love hearing about British movies from the time they had a vibrant industry.