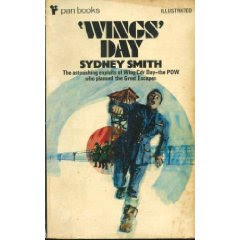 For a change and as it is Rememberance Sunday this weekend I have gone with a non-fiction book that was published in 1968.
The book tells the story of Wing Commander Harry Melville Arbuthnot Day better known as 'Wings' Day.
'Wings' Day had just turned forty years of age when war broke out and joined the R.A.F. He flew Blenheim bombers, an aircraft that he was flying when he was shot down.
Captured by the Germans he was imprisoned in Dulag Luft 1
from there he made several escape attempts. During this time he met up with Jimmy Buckley and Roger Bushell with the result that an embryo escape organisation began to take shape.
Without losing track of the story and the various escape attempts 'Wings' Day finally arrived at Stalag Luft 111. Here he planned the most audacious plan of all time to pin down thousands of German troops as they hunted 250 prisoners looking to make a 'home run'.
As everyone knows 75 prisoners escaped from Stalag Luft 111 in the Great Escape - 50 would never return.
'Wings' Day was recaptured and after interrogation by the Gestapo was sent to Sachshausen Concentration Camp where he shared a cell with three fellow escapers. Even the Concentration Camp could not hold him.
Almost home, the Germans caught him and this time they held him in solitary confinement in a death cell in Dachau Concentration camp. Even then his ordeal was not over for with many that were considered valueable were taken to the Tyrol where they were held hostage. Day escaped again and in a stolen Volkswagen he reached the allied lines and told them of the hostage situation.
As a prisoner of war 'Wings' Day had planned the first successful escapers' tunnel; developed elaborate code networks with Britain; gathered an organisation which could make, 'win' or forge anything and pinned down thousands of German troops to security duty.
'Wings' Day was the only Prisoner Of War to be awarded the DSO for services during captivity.
He died in 1977.
The book itself is a great read. What they call a real page turner as the pace never lets up.
But it also serves as a reminder that there were those Prisoners of War both in Germany, Italy and Japan of all nations who did not come home.
Posted by Ray at 03:00

Thanks, Ray. Great having you back.