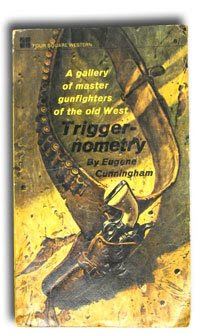 Eugene Cunningham was born in 1896 in Arkansas and died in California in 1957.

Cunningham's first western novel was 'The Trail To Apacaz' which was published in 1924. He continued to write westerns into the 1950s. Three of these were published under the name of Leigh Corder.

Triggernometry was first published in 1934 and was revised and re-issued in 1941.
As the blurb on the front of the books this is a gallery of master gunfighters of the old west. Many come with eye-witness accounts with the likes of Florencio Chavez who was involved in the shoot out with Billy The Kid at the McSween house.
Or Billy Breckenridge who was John Behan's deputy in Tombstone and gives a different slant on the Earps and the famed gunfight at the O.K. Corral.
There is nothing authoritive in Eugene Cunningham's tone - more like a man sitting beside you and recalling a story. Whether he is recounting the gunfight between Long Haired Jim Courtright and Luke Short outside the White Elephant Saloon or reconstructing the death of Dallas Stoudenmire the reader is left feeling that they were a witness to the action.
Although the attention is on seventeen gunfighters - each part brings in other well known characters from western history.
Triggernometry tells the stories of Bill Longley, John Wesley Hardin, Ben Thompson, Billy Breckenridge, Billy The Kid, Dallas Stoudenmire, Jim Gillett, Long Haired Jim Courtright, Ranger Captain John R. Hughes, Bass Outlaw, Wild Bill Hickok, Sam Bass, John Slaughter, Captain Bill McDonald, Butch Cassidy, Tom Horn and General Lee Christmas.

The final chapter contains 'technical notes on leather slapping as a fine art gathered from many a loose holstered expert over the years'.

Eugene Cunningham's Triggernometry was named by the Western Writers Of America as one of the best of thirty six non-fiction books. It is also one of my favourite factual books - my copy is forty two years old, dog eared with tanned pages - just as an often read book should be.
Posted by Ray at 00:12

I have this on the way. Many people including yourself have shown what a must-have reference it is. I'm doing something I haven't done in a long time and I'm re-reading a book, Cunningham's TEXAS SHERIFF. I discover so much knowledge and inspiration in his use of words and plotting of a story. An amazing talent.

An unlikely title for a western, no?

I love that title. I want that book too.