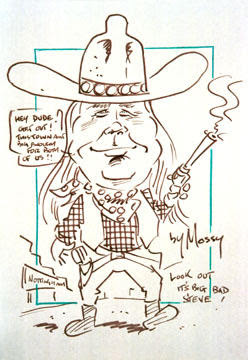 For many Western Fiction Review is a great source for information on Western novels. Over the past few months Steve has interviewed many of the top Western writers like James Reasoner, Frank Roderus and Marcus Galloway.
So who is the Oracle of Western fiction?
I thought I would ask Steve M about his interest in the Western genre.
1. Thanks for agreeing to this interview.

Thanks for asking Ray, it was a surprise to say the least.

2. What started your interest in westerns - and can you recall the first western novel that you read?

I think this would be due to watching so many western films and TV shows when I was growing up. To give some idea as to my age I grew up with The High Chaparral, Alias Smith and Jones, and Kung Fu.

I still have the first western book I read and intend to read it again soon as I’d like to review it on Western Fiction Review. It’s The Rimfire Riders by John Robb and is one of a few books he wrote about Catsfoot. It’s a children’s book and it, and the others in this series, really got me hooked on series characters. I still pick up westerns by John Robb whenever I get the chance.
3. You have an almost encyclopaedic knowledge of the western to the point that with scant plotline or the name of a character you have been able to point people to a book. How do you achieve this?

Truthfully I have compiled all kinds of information about westerns that is saved on my computer so is available at a click of a button. I also have a couple of reference books that help with writer’s names and pseudonyms and I’ve added all kinds of notes to them.
4. How many westerns do you think that you own?

I haven’t counted them for a long time now but it must be around 4,000. Most of them are from series. I have books from around 280 different series. I do have some stand-alone titles but not that many. My collection also contains about 200 BHW.

As storage space is getting to be a problem I keep thinking I really ought to sell some of them but just can’t bring myself to do it.
5. Do you think that over the years there was a time when the westerns were at their best? Or do you see that each era produced writers that are representative of their time?

I think the writers are representative of their time.

I like to think I can read a book from any era and appreciate it for the views and storytelling style of that time.
6. You have a chat board name 'Frontier Times'. Is this named for the famous publication of the same name?

No, it wasn’t named after anything. It was just the first short name that I came up with when creating the board and as I wanted the board up fast I just went with it, never gave it much thought other than “that’ll do.” Wasn’t until a few days later that I realized it was the same as that publication.
7. With Mike Linaker (Neil Hunter) planning to bring back 'Bodie' - is there another character created by The Piccadilly Cowboys you’d like to see return?

Easy answer, all of them!

If it had to be one it’d be a toss-up between Edge and Herne the Hunter – the latter would have to be books about his earlier life obviously. If it were to only be for one book then I’d say the often mentioned – never written – story that would have teamed Edge and Herne up in one book.

8. Are there any of the American series that you would like to see resurrected?

Probably more than I can mention here. Jake McMaster’s White Apache as this left many unanswered questions when Leisure cancelled all its western series except one. Josh Edward’s Searcher – although this did come to a conclusion. Clay Tanner’s Chance, Jim Austin’s Fury, Gary McCarthy’s Derby Man, Clint Hawkins’ Saddle Tramp, John Wesley Howard’s Easy Company, and Tim McGuire’s Rainmaker, to name but a fistful. I’d like to see the continuation of Don Coldsmith’s Spanish Bit Saga – there is another book but this has hit problems and it looks increasingly like it’ll never see the light of day.

There’s also a western series from Norway I’d like to see published in its entirety in English, and that’s Louis Masterson’s Morgan Kane.
9. Over the past few months you have interviewed some of the prominent western writers of today. So, who from the past would you have liked to interview and why?

Oliver Strange – author of the first ten Sudden westerns, as there seems to be so little out there about him and his work is often mentioned as a favourite of many readers. Peter C. Watts – who wrote most of his westerns as Matt Chisholm and Cy James. I’ve been a big fan of his work for as long as I can remember. Laurence James and Angus Wells – two of the Piccadilly Cowboys, whose books (along with a few others) started me, collecting westerns. Terry C. Johnston – think it’d be interesting to find out how many hours he spent on research and how easy it was. The list is endless really.
10. Having read many westerns - have you ever been tempted to write one yourself?

Not really, did start a few about 25 years ago that I did just for my own amusement. I still have them somewhere, I think I finished five or six of them but they are all in very rough drafts and are handwritten. I never had any intention of trying to get them published and that still applies today. I prefer to read them than write them.
11. What do you think of the western today and how do you see the future of the genre?

I think the biggest problem facing the genre – and others – is getting the younger generations to buy the books. This is something the publishers need to be more active in, promoting the western. There are many good stories to be read, both old and new but they won’t be bought if people don’t know about them. This is a problem I had when westerns all but disappeared off the shelves in the UK and this is something that could happen on a wider scale if people don’t know about them. The internet has helped in getting the word out and making books published in other parts of the world more accessible but I feel more could be done.

For today’s buyer there is still a number of publishers putting out great reads, both original work and reprints, meaning there are more westerns being published than I can afford each month. And there’s a new means to finding westerns and that’s through the many writers self-publishing, through a wide range of internet based publishers, meaning there even more books available than one might first think. So as a buyer of westerns, I’d say there’s plenty to choose from at the moment and I don’t see this changing in the foreseeable future.
12. Thanks again for your time.

Anytime Ray.
If anyone has not visited Western Fiction Review then a link can be found on the left panel.
Posted by Ray at 22:34

Hi Ray,
Fantastic read. So glad you turned the table on Steve! And now I have even more names to add to my list....

Excellent interview! Steve's done a lot for the Western and deserves the recognition.

I'm glad you turned the tables so to speak and offered a glimpse at this fantastic interviewer. Thanks.