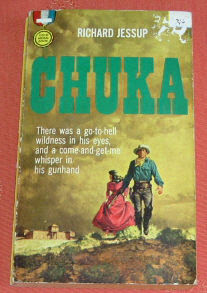 
It is November 1876 and the gunfighter known as Chuka is riding towards Fort Clendennon when he meets up with two men who had, once, taken him in when he had been wounded in a gunfight.
Now, they were on the run from a local rancher who wanted their land and punish them for the help that they had given to Chuka.
They arrive at the fort at the same time as the stage.
On board are a drummer John Sheppard and his new wife Evangeline - a one time whore with her own agenda; Helena Chavez who is en route to New York - the reluctant participant in a marriage arranged by her father and Veronica Kleitz who is Helena's chaperone.
It soon becomes apparent that Fort Clendennon is not a good place to be for the troopers have their own nicknames for the place -Fort Hell, Fort Blood and Fort Death. Nor is there much to be said for the thirty strong garrison that consists of theives, rapists and cowards and that includes the officers. The exceptions to this are the commanding officer Colonel Stuart Valois and Sergeant Hahnsbach a big man who keeps the men in line with his voice and, if necessary, with his fists.
As soon as Chuka arrives he is branded as an example of the man he is - a gunfighter. Valois is biased against him from the start and attempts, over an evening meal, to show up his fellow officers by listing their crimes to show that the gunslinger is no different.
After the meal Chuka drifts out to look after his horse and meets up with the Fort's scout , Lou Trent. Trent is fifty and aware of his own limitations but feels that he has no choice than to what he's paid for. He is concerned that the local Arapaho chief Hanu has not moved south for the winter and that the number of lodges are multiplying as the Chief is joined by Commanche, Ute and the Cheyenne.
Although Valois has reported Trent's findings to the nearest fort the claims are dismissed on the grounds that Hanu would not dare to attack Fort Clendennon.
Inevitably, Hanu does attack the fort.


Chuka is a character driven book during which layer after layer is stripped from the gunfighter's character until the reader discovers the real man. In contrast there is the unlikeable, rigid, Army loving Stuart Valois for whom the reader begins to have some respect for (and it is my view) because the reader makes a judgment on Valois in the opening scenes very much in the same way that Valios sees the gunfighter.
Richard Jessup only wrote a handful of westerns but I found Chuka to be the most interesting. There is a smooth quality about the writing style that draws the reader in to keep on turning the pages. The characters are interesting and when the action comes it comes abruptly and in a natural way.
This is not a shoot 'em up western and the attack on the fort does not come until late in the book which in no way detracts from the story. Like the characters you know it is coming and like them you do not know the when.

Richard Jessup is maybe better known for 'The Cincinatti Kid' but I think that this western is better.
Chuka was turned into a movie with Rod Taylor as Chuka, John Mills as Valois and the late James Whitmore as Lou Trent.
Although the screenplay was by Richard Jessup and produced by Rod Taylor the movie was not up to the standard of the book. Some of the key scenes remained and there was a completely differant beginning and ending. Much as I like the film I have to divorce my mind from the book.

This is certainly a case of where the book is DEFINATELY better than the film.
Posted by Ray at 22:14

He is a wonderful writer based on the one book of his I read, The Cincinnati Kid. Chuka sounds like a good read. Btw I'm supporting the British economy. I bought several Black Horse westerns yesterday from a UK seller.

It's rare that the movie is better than the film, isn't it?

David - Hope you enjoy the Black Horse Westerns. You will have to let Gary and I know what you think.

Patti - it is rare for the film to be better than the book - but once in a while they do come out equal. But not in the case of this book.

I've seen the movie a few times and always enjoyed it. Let's not forget Ernest Borgnine played the tough old sergeant, and was, as usual, great in the role.

I have read the book several times. I do agree the film falls far short of the novel though I did enjoy it for what it was. In my opinion to follow the novel closely the film would have been too long. Just my opinion though.