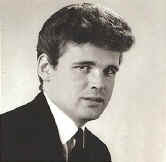 Think of the 'PETER GUNN' theme and I can't help but couple that with the name of Duane Eddy.

It is strange to think that this year marked his Seventieth birthday and that he has spent fifty of those years twangin' that old guitar.

Duane was born in 1938 in Corning, New York and moved, in the fifties, to Pheonix, Arizona.

There are various versions of his influences that range from gospel and blues to a love of the guitar playing of Gene Autry and Django Reinhardt. Whichever way you look at it all those influences flavour his music.

In the mid-fifties he met up with DJ Lee Hazlewood with whom he began writing music which Hazlewood began to produce. Duane was signed up to Jaime Records (released under the London label in the UK) and, in 1958, released the first track 'Movin' and Groovin'' that proved a modest success and established that 'twang' sound. This sound came from the bass strings of the guitar.

'Rebel Rouser' was the big breakthrough record and it was this that made me aware of rock n roll.

Duane Eddy holds the record for the shortest disc to make the top 40 with 'Some Kind-a Earthquake' that plays in at 1 minute 17 seconds.

In 1960 a recording of 'Ghost Riders In The Sky' by The Ramrods was thought to be by Duane Eddy for the legendary twang and the calls and whistles that were the hallmark of Duane Eddy and The Rebels (his backing group). In fact The Ramrods were a Connecticut group consisting of Claire Lane (drums), her brother Richard (sax) with Vincent Bell Lee and Eugene Moore (guitars). They had the sound down to a T so it is understandable that there was some confusion at the time.

Though it is said that Duane Eddy never varied his sound time has proved that he could be innovative. The album 'Songs Of Our Heritage' shows another side of Duane Eddy's work as this is probably the first 'unplugged' type of album by any artiste. Also there is 'Twangy Guitar And Silky Strings' that combines Duane Eddy's sound with a string orchestra. When Duane signed to Sinatra's Reprise label he produced two big band style albums - 'The Biggest Twang Of Them All' and 'The Roaring Twangies'.

Duane Eddy made several films: 'Because They're Young', the 1968 Biker movie 'The Savage Seven' and 'Kona Coast' with Richard Boone.
His first appearance was as a guitar plucking cavalry trooper in 'A Thunder Of Drums' with Richard Boone, George Hamilton, Richard Chamberlain and Charles Bronson. He followed this with another Western 'The Wild Westerners' - a B movie where he was billed in third place - ahead of singer/actor Guy Mitchell. He wrote the film score and the main title theme was the B-side of 'Ballad Of Palladin' which was the theme from the Richard Boone series 'Have Gun-Will Travel'. Duane Eddy guest starred in two episodes of this series.

In 1994 the Grammy Award winning Duane Eddy was inducted into the Rock N Roll Hall Of Fame.
Over the years Duane Eddy's guitar playing has influenced many other artists ranging from Paul McCartney and George Harrison to Bruce Springsteen.
Duane Eddy plays the end titles to the John Travolta movie 'Broken Arrow' and those twangy guitar plucks to announce the villain are his fingers at work. Hans Zimmer, who wrote the score, is quoted as saying: "I always thought that Duane's style was being ripped off by the spaghetti westerns. But this time I got the real thing."
I can see his point. There have been times when I have thought that - the score to 'A Professional Gun' with Franco Nero sounds as though it was something that came from Duane Eddy.
That's the thing with influence - the sound is always there.
To use the title of one of his tracks I guess Duane Eddy will always be 'The Man With The Golden Guitar'.
Posted by Ray at 11:30

Duane Eddy has always been a name from rock and roll history to me. I never knew that much about him until now that is.

Must be an age thing, Archavist. I know I have several vinyl platters (remember them?) stashed away. Also one good, Australian-made 22-track "Greatest Hits" CD, compiled from the Rajon/Jaime and RCA tracks. Good music to have going when you're writing lively western action scenes! Thanks for the reminder, Ray.

Archavist: Duane Eddy has always supplied the background music to my life. He may not be remembered for his acting - but his music will always be around.

Hi Ray,
Nice to know someone else digs Duane Eddy! I had the great fortune to exchange a few emails with him (and his wife) a few years ago, mostly about guitars, etc. At the time I owned a Gretsch 6120 (big, ol' orange twang machine). He's a gentleman and one of my favorite musicians. Thanks for the memory!

By the way, a fantastic collection that is readily available, new and used, is "Twang Thang: The Duane Eddy Anthology" by Rhino Records. Two CDs and an extensive book with tons of photos.

His whole body of work is excellent. His version of the Peter Gunn theme is even better than the original.