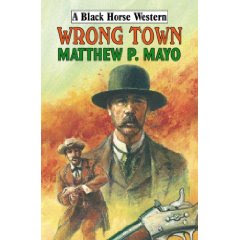 Published by Hale - Black Horse Western - Feb 2008
Roamer is having a bad day - he is savaged by a grizzly, robbed by bandits and attacked by wolves. So by the time he makes it to the little Rocky Mountain town of Tall Pine all he wants is a cup of coffee, a hot meal and a soft bed. Instead, the sheriff jails him for murder.
Layers of lies and a string of killings blacken the very soul of Tall Pine as a seething mob marks Roamer's homely face as guilty and seeks its twisted justice with his blood. Can he stop the townsfolk from destroying themselves or will they kill him first? It's a race against time for Roamer as the savage mob rips apart its little town, leaving innocent people dead and the wrong people in charge.
This has to be my top book for 2008. Even now, nearly a year gone now Roamer's fight with the grizzly still lives in my mind.
Matthew P. Mayo is a relatively new western writer and I have read all three titles that he has written so far. The other titles are WINTER'S WAR and HOT LEAD, COLD HEART.
Other western writers that I have enjoyed this year are Rory Black with his Iron Eyes series; James Reasoner's 'Death Head Crossing' and his Longarm novel 'The Restless Redhead'; Chap O'Keefe's Misfit Lil; the western novels of Australian writer Jake Douglas; Corba Sunman - another Black Horse Western writer and the discovery of Hank Mitchums's Stagecoach Station series.
Also, this year has seen the collaboration of British writer Dave Whitehead and the German western writer Alfred Wallon with the excellent re-telling of Adobe Walls in 'ALL GUNS BLAZING'.
And I have to mention that June this year saw the publication of Jack Giles 'LAWMEN'. His ninth and my 'first'.
It would be interesting to know what book of the year other people nominate. In the meantime a Happy New Year.
Posted by Ray at 15:40

Thanks Ray. I will be on the watch for Matthew P. Mayo and his work.

Hi Ray,
Thanks so much for your kind words about "Wrong Town" and my writing. It means a lot--and it made my day!

2009 is shaping up to be a busy one: I'm working on a non-fiction book about the Wild West for a few more months, then it's back to several fiction projects. I'll try to live up to your high praise. Most appreciated, Ray. Thanks! And have a great new year.