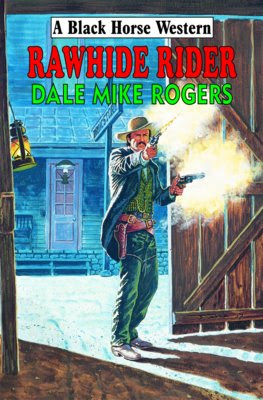 RAWHIDE RIDER by Dale Mike Rogers due to be published 30th January 2009 by the Black Horse Westerns imprint of Robert Hale Ltd.
Seasoned gunfighter Rawhide Jones quits working for Diamond Jim Brady in an attempt to start a new life as a lawman far from Laredo down in the border town of Santa Maria. But Brady has other ideas and sets the rest of his gunmen on Jones' trail to kill him for nobody quits Diamond Jim Brady and lives to tell the tale. Can Rawhide Jones survive and turn the tables on his evil boss? With the help of Marshall Ethan Parker and his two sons, Jones tries to do the impossible and live.
So what do Black Horse Western writers Dale Mike Rogers, Boyd Cassidy (author of the Bar 10 books), Roy Patterson, John Ladd, Walt Keene, Dean Edwards and Rory Black have in common?
They are the pen-names of 57 year old, Cardiff, Wales born Black Horse Western writer Michael D. George.
Last year he nearly died and his health suffered but he can still write.
This year saw the publication of Rory Black's 'THE REVENGE OF IRON EYES' in July and Michael D. George's 'KID DYNAMITE' in August.
I first became aware of Rory Black's Iron Eyes books when Steve M did a review, last August, of the novel 'SPURS OF THE SPECTRE' on his excellent blog Western Fiction Review (see panel for the link). I was hooked on the character and wanted to know more.
From time to time I read the back numbers at www.pulprack.com where I came across an article by Black Horse Western writer Lance Howard. One of those who responded to the article was Michael D. George.
Recognising some of his pen-names I wrote to Michael asking for an interview and this is the result.
1. Thanks for agreeing to this interview.
It is my pleasure to be interviewed.
2. What prompted you to become a writer? And why westerns?
Well, ever since I was a small child I sort of knew that I wanted to write. After years of trying I just thought that I would try westerns and 'THE VALKO KID' (BHW April 1999) was accepted. The funny thing is that when I was about 13 I tried to write a western called 'The Valko Kid'. 34 years later I got it right. I have a vast knowledge of the wild west but never used it until 1998.
3. Was your first accepted book a western or something else?
No, like I said Valko was it.
4. With so many pseuonyms do you work on more than one book at a time?
No, I tried that but my brain could not cope.
5. Of all the books that you have written do you have a favourite?
My favourite book is 'The Valko Kid' because it was the first but Iron Eyes runs a close second.
6. Which of your books would you recommend to a new reader of westerns?
That's a tough one. I think my novel 'THE MEXICAN BANDIT' (by Roy Patterson - BHW Jan 2001) is fun. I am sure that someone new to the genre might like it as it is different to the average 'oater'.
7. Rory Black's character Iron Eyes is very interesting. Can you tell us something about the inspiration behind his character?
Iron Eyes is a mystery even to me. I had just written a book 'KID PALOMINO' and John Hale of Black Horse accepted it but said that I needed more action in my next book. So I thought "I'll give them action." I started to write about a saloon with blood dripping down the walls and there was Iron Eyes. He just came into my mind. At first, Mr Hale was not so sure about the character as he did not fit the 'hero' stereotype. I explained that he was an anti-hero and since then has proven to be my most popular creation.
8. Do you have any tips for new writers?
Know what you are writing about so that fiction relates to fact. It has to ring true or you will fail. Detail.
9. Finally, what do you think of the western genre today and how do you see the future of the genre?
I think westerns are as good today as they have always been.
The future lies in the hands of the buyers for W.H.Smith etc though. There was a time in the 70s when the western filled acres of space and sci-fi and fantasy was regarded as dead. Now the reverse is true. It is all in the taste of those people. Publishers cannot make paperbacks if companies like Smiths won't give them shelf space.
If TV had a few family shows on the west like 'Gunsmoke' and 'Bonanza' the attitude would change.
There are no masculine parts to stores like there was. I think buyers are missing a trick though - men have to be made welcome or their money stays in their pockets.
It has been nice talking to you, Ray.
Thanks again Michael.
I do think that he has a point there. It does seem that writers and publishers are at the mercy of a handful of distributors who control what the public reads.
As a few additional reads that I have read are Roy Patterson's 'The Way Station' (this has a great action packed cover that fits with the book); Dean Edward's 'The Valley Of Death' and Dale Mike Rogers 'The Mustang Men'. All worth a look.
Posted by Ray at 22:53

An interesting interview - It's great to learn more about all these Black Horse Writers. I'm part of that stable too and although I don't really know these guys they seem like friends.

A very enjoyable interview and it seems I have quite a few of his books in my collection. Could be time to try a few more.

Thanks for the interview. I've read a Bar 10 book and the next book on my TBR pile happens to be Iron Eyes. Considering I just buy books at random, and I have no idea who the authors are beyond the name on the cover, it seems funny to me that I've picked up two of his. Ignorance is bliss, but knowledge is interesting. :-)

Good on Michael for sticking to his guns over the non-stereotypical Iron Eyes!

Sadly, today caution is as never before threatening originality -- who and what we are allowed to write about in westerns.

I have had it suggested to me in the past 24 hours: "It is quite possible they [other potential western publishers] feel it necessary to impose the same kind of straitjackets I would feel necessary in order to preserve our markets."

I find that very depressing.

Another recent comment on characters was: "You must be the only western writer who chooses a woman as a central figure and it certainly always used to be axiomatic that women played a very small part in westerns. I think therefore that as ever you are going against the general run. Whilst I appreciate your efforts at originality in a somewhat overworked genre, this can lead to problems. In this case although the basic storyline is acceptable I can see one or two areas where there could only too easily be the sort of problems we have experienced with the MISFIT LIL books."

Actually, the great Les Savage Jr. got to the female western hero in the pulps years ago with Señorita Scorpion. And at the very beginning, in Beadle's dime novels, there was Hurricane Nell, a fictionalized Calamity Jane and Denver Doll.

Happily, Lil is to me as Iron Eyes is to Michael. I hope her career is not going to be cut short. I was about to start on the writing of the seventh Misfit Lil story this week. Now, I don't know. The readers need to make their views known in certain quarters, quickly please!

I too tend to agree with a lot of Chap's remarks, particularly on western formula often being too rigid. If no one experimented then the genre would not evolve. Still there's nothing wrong with a traditional western and I've read two of the Misfit Lil books and enjoyed them very much.

Now this sounds like we could do a blog on the subject of women in the wild west.
Misfit Lil has her place - the thing I like about this is that it is a western series with an appeal to both sexes.

Nice interview! Thanks for following up with Michael George.

I find Chap O'Keefe's notes from his publisher interesting. There's been a growth of western-romance themed (or subgenre) novels in recent years -- or so the grocery and large discount store racks seem to say. Mostly these are from Harlequin (or one of their imprints). But female leads in some of these books seem the norm. Bill Crider wrote two Gold Medal-styled action westerns with a woman lead character a few years ago. And Signet paperbacks published a number of westerns with female leads by Suzann Ledbetter. So I'm not sure this "insight" from publishers is accurate concerning readers' interest. Stick to your typewriting guns, folks!

Duane, You're right, I'm right, but with readers largely silent in their approval it gets very difficult trying to convince publishers with set ideas about this or that. That's why I was glad to see from this interview -- and other snippets that come my way -- that I'm not the only one who tries! (Like your Spur and Lock initiative, by the way.) Keith

Very nice interview. I love reading about other Black Horse authors, especially those who, like yourself, have overcome great difficulties and remain wonderfully creative.