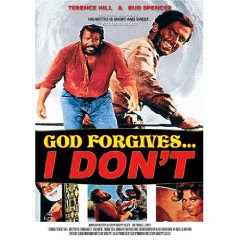 GOD FORGIVES...I DON'T
1967
Starring Terence Hill, Bud Spencer and Frank Wolff
Directed by Giuseppe Colizzi
This movie saw the first pairing of Terence Hill and Bud Spencer who were better known for the Trinity movies and, maybe, that is what taints this film.
God Forgives owes more to the 'Dollar' movies and, therefore, has a laconic sense of humour.
The story is simple. The outlaw leader, Bill San Antonio (Wolff) fakes his own death by forcing Cat Stevens (Hill) into a gunfight over a game of cards. Piece by piece the whole story comes out through a series of flashbacks.
When a train is robbed and all the passengers killed the finger points at it being the work of Bill San Antonio - but he's dead. Insurance Investigator Hutch Bessy (Spencer) is sent to look into the matter and enlists the aid of Cat Stevens who works to his own agenda. He wants to see San Antonio dead and, at the same time, has his eye on the money.
The film is slow to start off with but it is paced so that it livens up quickly.
The DVD for this film is of poor quality - watchable though - but this is down to the production company.
Two further films featuring Cat Stevens and Hutch Bessy followed. 'Aces High' with Eli Wallach and 'Boot Hill' featuring Woody Strode. Both these films and 'God Forgives' were directed by Giuseppe Colozzi.
For film buffs: Terence Hill was born Mario Girotti in Venice during 1939.
Bud Spencer was born in Naples during 1929 as Carlo Pedersoli.
Posted by Ray at 23:29