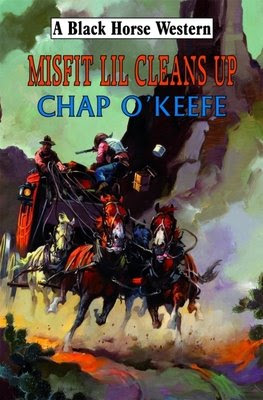 MISFIT LIL CLEANS UP - published October 2008 by Robert Hale Ltd under the Black Horse Western imprint.
Keith Chapman, who writes under the name of Chap O'Keefe, was born in Enfield in North London in 1943.
Writing was in his blood from an early age - his first written words appeared on 'Smiler's Page' in the 'Adventure' comic in 1955 - and he got paid for it.
Keith went into the world of publishing and going on to edit such things as the 'Sexton Blake Library'.
In the 1960s he was in Mitcham, Surrey where he was the editor of various British pocket comics like Western Adventure Library and Cowboy Adventure Library.
One of the difficulties that he encountered was matching covers with stories - an easy way around this was to send the cover to friends - like Vic J Hanson - to write a story to fit the picture.
I was an avid reader of these comics and the Sexton Blake stories.
Eventually, Keith took up the pen himself and began to write western novels for Robert Hale.
The first Chap O'Keefe novel that I read was 'SHOOTOUT AT HELLYER'S CREEK' the first of the Joshua Dillard novels. Dillard is an intriguing character for he is an ex-Pinkerton man who becomes a hired gun/detective. All the Joshua Dillard novels have that mystery element but Dillard, for all his hard work, never seems to profit from his skill.
Apart from the Joshua Dillard novels Chap O'Keefe has created a western heroine in the shape of Misfit Lil.
Chap O'Keefe has written a number of stand alone books amongst which is 'GHOST TOWN BELLES' which has to be one of my favourites. There is a hint of the deep south novels of Erskine Caldwell in the make-up of Mad Dan Dungaree and his daughters (the belles of the title).
The hero is not one of those quick draw artists but a gentle, out of work cow hand who is drawn into the story as he attempts to 'rescue' the belles.
Another book 'THE OUTLAW AND THE LADY' was recently reviewed on the blog Western Fiction Review (see side panel for the link).
Chap O'Keefe is an interesting and solid writer who almost saw the above book become a film. Pity that did not happened for his descriptive style is very visual.
Posted by Ray at 11:25

Just thought you might like to know I'm half-way through the pictured book: Misfit Lil Cleans Up, and a review will follow very soon on Western Fiction Review.

Still waiting for my copy from Hale - hoped to have it by now.
Look forward to your review.

Ray - what happened with the possible film?

As far as I know they changed their minds. Maybe, Keith can throw some light on the matter.

Sorry to have taken so long to respond, Ray. I've been away down country on a family jaunt with wife, two sons, daughter-in-law and one-year-old "miracle" grand-daughter, Ella. (You can read about her early life and how we nearly lost her at http://chapman.net.nz/ )

Great time had by all!

Now then ... the movie that never was. Very similar really to the story many writers have had to tell over the years. I reckon only a very, very small percentage of proposed movies ever get made.

Back in 1995, a journalist colleague at the New Zealand Herald decided to run as a feature glowing reviews of a couple of my westerns, The Gunman and the Actress and The Outlaw and the Lady. The article led the Weekend Books section in Jack Leigh's respected Foreword column. I'd mentioned to Jack that it would be easy to film certain westerns in NZ since the country had the scenery and the production talent. Jack turned this into "It is the dream of Chap O'Keefe that one of his westerns be filmed some time in the high country of the South Island -- 'the locations are there so why not? The Italians, the Spanish, the Czechs and the Russians have made westerns. We'd need a couple of overseas stars.'"

In fact, I had The Outlaw and the Lady very much in mind when I said this, since many of the principal characters were British nobility and could be easily cast from local TV actors, though an American "name" would have had to be imported for hero Tod Larraby.

Also, NZ's Southern Alps could double adequately for the Colorado Rockies. And no pesky ski resorts or air bases in the way either!

Come Monday morning and the phone was ringing. A couple of NZ movie people, Murray Francis, of Paradise Pictures, and Kevin Chisnall, of Action Associates, had seen Jack's article and wanted to see me. I met them at a restaurant in Ponsonby for a kind of working lunch. I also went along to Kevin's home in the Waitakere Ranges in West Auckland (TV's Hercules and Zena land).

Both gents read the book and were keen to see a screenplay. So I produced one, but that was as close as a movie got to being made, though I believe Kevin scouted out the locations and even had cast and crew accommodation in mind. As always, the "dollars and cents" had the final say. Even a budget movie costs millions, and it seemed an international backer with deep enough pockets couldn't be found for a western at the time, so it fell through.

Very disappointing for me (and the few BHW insiders who heard about it), but I'm sure Murray and Kevin went on to the next enthusiasm, leaving me with the unused and unpaid for, first-draft screenplay. Not too much of a loss, I guess. It's very easy to turn a 160-page, fast-moving BHW into a 90-minute screenplay. In fact, except for the past tense, many BHWs could easily be regarded as movie scenarios/treatments.

Please write me directly at
steffercat@austin.rr.com
as your email address is not apparent here.