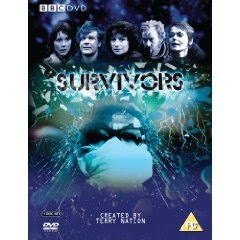 SURVIVORS was a 1970s BBC series. It was created by Terry Nation - better known for his 'Dr Who' series.

At Christmas, a couple of years ago, my wife bought me Series One and Two. This came as a bit of surprise as I hadn't a clue why she bought it. As it turned out it was one of those programmes where I would not miss an episode.

Survivors is set in the UK and deals with a world wide flu-like virus that wipes out all but a handful of survivors who, gradually, come together in order to survive.

Although dated - it is reflective of the time. One 'brilliant' moment was when a band of looters steal TVs from a shop - at a time when there is no electricity - why?

Apart from that the series did have a serious message. If you were a survivor what would you do? In one episode there is a good performance by George Baker as an ex-MP who is starting up a dictatorship with his own ideas on ethnic cleansing - dispose of anybody who disagrees with him.

As the series progresses the survivors begin to learn new skills and take up farming - this leads to trading with other communities. And yet none of these groups appear to want to join each other which is something that I could not quite fathom. Maybe, the answers are in Series 3 which I'm hoping Father Christmas will put in my stocking.

By the end of series two contact is made with survivors from Europe.

Now, the BBC have re-made this series and airs later this year. Written by Adrian Hodges who is, also, a executive producer with Susan Hogg (Larkrise To Candleford)

Julie Graham will take over the Abby Grant role and Freema Agyeman (better known for her roles in Dr Who and Torchwood) takes on the role of Jenny. These were the main leads in the original series one. Another Dr Who actor - Shaun Dingwall has a part to play along with Max Beezley (brilliant in the adaptation of Tom Jones and Hotel Babylon) as Tom Price.

From the trailer I am in two minds - a hospital scene that looks a bit '28 Days Later' and a man playing football with a kid on an empty road doesn't seem real to me. At least, the original had abandoned vehicles around - and a hint that people had died while still on the road - and the remains of a multiple pile-up on a motorway.

Still, I will watch the opening episodes - give it a chance to impress. Until then - well I'm sticking with the original.

I too loved this one - there wasn't that much home grown SF in those days but when there was it was great.
I also remember a sitcom based on the end of the world - can't quite recall it.

Sounds good. Wonder if it's on netflix.