The Legend Of Lord Snooty 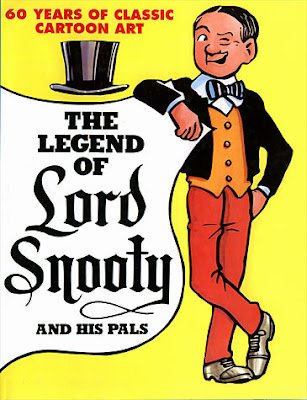 Marmaduke, the young Lord of Bunkerton was better known to comic readers as Lord Snooty.
Despite his upper-class description he liked nothing better than mixing with the kids from Ash-Can Alley.
These were Rosie, Hairpin Huggins, Skinny Lizzie, Scrapper Smith, Happy Hutton and Gertie The Goat.
Lord Snooty and his gang made their debut in the 'Beano' on the 30th June 1938 - so were there from Issue no: 1.
The Beano was a rival to the Dandy that had first appeared in December 1939.
Lord Snooty was drawn by Dudley Dexter Watkins, the creator of Desperate Dan who appeared in the Dandy. Watkins would make 'guest' appearances in the Lord Snooty strip.
During the war years Lord Snooty and his gang would take on Nazi Germany. In one classic strip they dress up as Hitler and Goering to help capture the crew of a U-boat. In another, the Germans attempt to bomb Bunkerton Castle - only the ramparts are manned by a bunch of trained seals who toss the bombs back across the channel to where Hitler and Goering are sitting. As the bombs fly towards them Hitler asks: 'M-mine goodness, Goering, what are these?' Goering responds: 'These are bombs, Adolph! What do you think they are? Sparrows in steel helmets?'
In 1949 Lord Snooty took a break but returned in late 1950 - it was last appearance of the Ash-Can Alley gang though Scrapper Smith would remain along with the twins Snitch and Snatch. Joining Lord were Big Fat Joe, Doubting Thomas and Swanky Lanky Liz who had 'starred' in their own strips.
In 1958 Albert Holroyd, Robert Nixon and Ken Harrison joined the drawing team.
The book contains some great historical detail including both Lord Snooty's first and last appearance in the Beano.
It was an experience to read some of the Lord Snooty stories that I had not read before and catch up with those that I had.
For £5.75 this is a good buy.
Posted by Ray at 22:45

I love this kind of history and nothing beats these old comics. I will look for this if it's being sold on our side of the pond. I just finished some Will Eisner comics from the 1940s which were amazing.

I'll have to get this - I only remember the character from the 1970's Beano and onwards. I never realised he had been around quite as long. I'd love to see some war time beano comics. You know I might even pick up a current Beano and see how things have changed.

Just making sure you got my first email, since I didn't hear back from you.

Broken Trails is invited to be a tour stop during the virtual tour for:

We are specifically seeking a UK audience and would be pleased to provide you with any content you wish,unique or canned.

To participate in the tour and bring global audiences to your site along with byline recognition,
please email back a date between December 3 & December 23 that you agree to upload unique
or ready content on this title.

Please respond with your preferred upload date & # of hits per day by Monday, November 17.