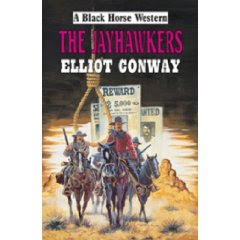 Published 2006 by Black Horse Westerns (Robert Hale Ltd)
And one of my favourite Elliot Conway novels.
Elliot Conway is a writer who is now in his eighties and is still writing western novels. His 44th book 'THE DEATH SHADOW RIDERS' is due for release in July 2009.
Elliot Conway is the pen name of Albert Hill, from Darlington, who left school with hardly any qualifications and earned a living as a bill poster.
During the Second World War served in tanks and once wrote a book about his experiences in Burma. Unfortunately publishers, at the time, thought that it would not do well.
Despite this Albert Hill still wrote the odd article for the company magazine and the local paper.
Albert Hill's western writing career did not start until he was in his sixties. He had seen an advert in 'The Northern Echo' regarding creative writing and responded to the invitation by attending a meeting held at Crombie's Cafe in Darlington. The second meeting did not go well for the journalist that was heading the course was posted to London. However, with thirty people all wanting to write and gathered under one roof they took matters into their own hands and the Darlington Writers Circle was born. Albert Hill is, today, the Chairman of that Writer's Circle.
So for my first ever interview I had a long talk with Albert Hill about his work and influences.
Influences: From childhood he had liked westerns - both film and books and lists Charles O. Locke and Alan Le May as favourite writers - writers that he wished that he could emulate. He spoke about one of Alan Le May's forgotten books 'The Unforgiven' which was made into the film starring Burt Lancaster and how it reverses the story told in 'The Searchers'.
The first book? Was the third book that I wrote. I sent two books to Robert Hale and I was not sure which one to send - so I sent him two.
The first 'THE MAN FROM SHILOH' was published in 1987 when Albert was aged 65.
Do you have a favourite Elliot Conway novel? He names 'THE CHICKAMAUGO COVENANT' amongst his favourites for he was able to relate parts of the American Civil War into the story.
Also, he named 'THE GREENHORN' and 'THE COMPADRES' as amongst his favourites as he was able to bring in more real characters like Geronimo and General Crook into the storyline.
How did the trip to the USA influence you? 'The original BBC concept was to take us out to The Alamo but that was changed to Wyoming instead. Irene (Ord - also known as Tex Larrigan) and I had a great time visiting Butch Cassidy's cabin, the Big Horn where Custer's Last Stand took place. We stayed in Cody named for Buffalo Bill. We watched a cattle round-up run by a chap from Arizona - Bob the cowboy - it was all very breath-taking. Irene came back with a book inside her head and ready to write. It takes me a little longer.'
Albert writes in longhand and then types it up on an old electric typewriter - he does not own a computer.
Is there anything else that you would like to write about? 'I would like to write a novel set around the Pontiac Wars. '
Well, I for one, would look forward to that.
Pontiacs Rebellion occurred in 1763 when the North American tribes united under the Ottawa chief Pontiac. Dissatisfied with British policies around the Great Lakes Region after the victory in the French Indian War (1754-1763) the warriors joined forces to drive the British soldiers and settelers from the region.
Albert Hill is a man who does not keep his writing skills to himself. He takes his writing skills into school where he teaches creative writing. He also does one to one reading with children and is very encouraging.
I would like to say thank you to Albert Hill for his time and all the information that he gave me. It was really appreciated. I have read many Elliot Conway books and enjoyed talking to him about them.
One of my favourite Elliot Conway novels is 'THE PANHANDLE SHOOT-OUT'. Not only does this story concern Marshall Lund's accidental killing of his deputy and how he comes to terms with it but there is an interesting story within that story concerning Big Ellie Braddock - and she's not called Big Ellie for nothing. What Big Ellie does have is a warmth of character that very few male writers have acheived. This is one book that should be read.
I hope that this article will encourage others to write - for, as seen here, there is no age limit.
Posted by Ray at 23:36

Excellent article/interview Ray. I have a number of Elliot Conway books around here someplace. I really must dig 'em out.

I have the panhandle shootout in my hand - never read it but it was amongst the job lot of BHW's I bought recently. I'm gonna start reading it this evening - the author information in your piece will add to my enjoyment.