History belongs to a country yet the wild west defies boundaries.
In a recent interview with Paul Bishop (one of the editors behind '52 Weeks. 52 Western Novels') I was asked about my early influences. Was it books or movies? In fact, none of those.
I was born in the wild west, not that I really grasped it at the time.

The wild west was The Sandpits - a park in North Finchley (North London). Flat grassland flanked by trees that led down to a slight mound then swept down into a bog and a pond. Though, in a child's eye - a swamp and a lake. Eventually, a stockade would be built on the mound with a 'Wendy house' for girls. Though it doubled as a ranch house.

In 1950 - and for some this may be hard to imagine - a wild bunch of five to seven year olds would troop off to the park where chases and gunfights would ensue. The older kids had cowboy hats and pistols - we five year olds had to content ourselves with sticks. At the end of the day we would amble home tired and dirty. That was our introduction to the Wild West - we were born to be gunslingers. The early influences were our peers who had learned things from scratch.

As a six year old I was old enough to head down to the Odeon cinema to go to the Saturday morning pictures. For sixpence you got a cartoon, a serial (Flash Gordon; Rocket Man) and a movie - Hopalong Cassidy and Roy Rogers and very early John Wayne. The western had come alive - as kids with sticks we had chased down rustlers - and there on the big screen were men doing just what we did. That Christmas I got a stetson, a pair of holsters and a vest (the latter made by my mum) and two silver Chad Valley cap-firing pistols. It was like being given a rite of passage. I was one of the big kids.

Then Tex Ritter came to Haringey Arena. It was the most thrilling day of my life - I was so excited and speechless all at the same time. Roping steers; bucking broncos - a pure feast of all things western. The finale was wild as a stagecoach was attacked by a bunch of Indians and it looked daunting until Tex Ritter and the Cavalry turned up to save the day.

The Queen's Coronation bought something new into our lives - a black and white television and with it came 'The Cisco Kid', 'The Range Rider' and 'The Lone Ranger'. I just could not get enough. Along with tv came comics - Kid Colt and Ghost Rider (early Marvel I believe). These new American comics were branded as bad influences - too violent for young children who watched the equivalent or listened to 'Jeff Arnold' on the radio or read his strip in the 'Eagle' comic.

In fact writing a short western story at school had the head drag my mum and dad into his office wondering about my influences. Nor would this be the last time that my parents would be held to account for the things that I wrote.

I was about fifteen when I finally hung up my guns. I mean my collection of cap guns - I had been reluctant to part with them but then it is never easy to surrender a child hood. The event that caused this was with a real Colt .45. I had joined the Air Training Corp where I was assigned to the Guard Of Honour. We drilled with Lee Enfield rifles armed with blank rounds - but when on duty they were not. To cut a long story short - we went down to a firing range and I discovered that I was pretty accurate. I don't know the how or the why but I hit what I aimed at. To use someone else's quote 'I know how to use a gun - I just don't have a need for one'. So the kid hung up the toy guns and quit the A.T.C.

It was far easier to let the celluloid stars do the gunfighting - or read the likes of Frank C. Robertson, Luke Short, Louis L'Amour to keep me enjoying my favourite genre. As for writing - that was best left to the Americans.

Only things were going to change - and I discovered  a different use for a gun. 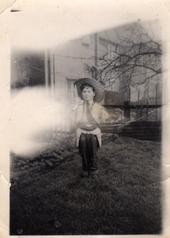