James Gunn is sitting outside a Cumberland pub admiring the local scenery of the English countryside when his conversation with his friend is interrupted.  An angry young farmer bears down on the protagonist with a promise to stick him with a pitchfork unless Gunn marries his pregnant sister. In the fight that follows the young farmer falls awkwardly, breaks his neck and dies.

In no time at all Gunn heads for Liverpool and arrives in Boston. Here Gunn discovers that he is well out of his depth - a stranger in a strange land. Pick pockets, thieves and con-men wait for unexpecting victims and it is not long before Gunn loses everything. Outnumbered in a bar room brawl he wakes up aboard a wagon driven by Art Thackeray. Paid to dump Gunn in the middle of nowhere Thackery proves to be Gunn's saviour.

Taught how to use a gun and bullwhip things look good for the pair to go into business together but fate intervenes and Gunn finds himself adrift in the Army town of Fort Wayne. It doesn't take long for him to fall foul of the local bully and he is on the run again.

Fortunately, there is a job up for grabs - guiding a wagon train to California. This takes up the second half of the book and is fraught with it's own dangers with Pawnees on the rampage and a crooked cabal who do not intend the train to arrive at the final destination.

There is something about Gunn's character that shows that he is on a learning curve - his naivety of the west shows through but he learns from his mistakes.

The James Gunn series last for 6 books. The first appeared in 1976 by MEWS a New English Library imprint though the final two (neither of which are numbered) were published by NEL. This was in the middle of The Piccadilly Cowboys era but author John Delaney does not appear to be one of them.  In fact there does not seem to be any info on this author. 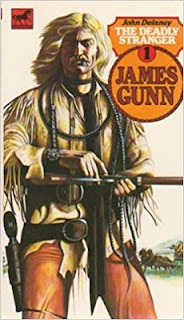