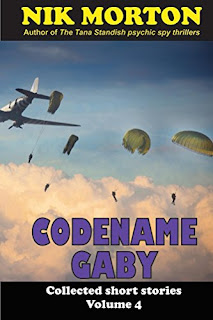 Once in a while a book turns up that takes me back to the past.

Reading Nik Morton's afterword is just like that as he mentions influences and books that he read back in his youth.

The title story 'Codename Gaby' harks back to the likes of Odette Churchill. 'Carve Her Name With Pride' and 'Moondrop To Gascony' with the female agents who were trained and dropped into France to work with the resistance. Many did not survive - while of those who did nothing has been known about their exploits until they died in old age.

Another story in this collection 'The Reckoning' is set against the backdrop of the English Civil War. This tale is inspired by The Laughing (or Gay) Cavalier Claude Duval. Drawn by Frederick T. Holmes between 1953 and 1959 for 'Comet' comic before Duval appeared in his own comic as part of  Thriller Picture Library.

The magic of 'The Proper Thing To Do' is that it was the type of story that turned up in the written word comics of the late 50s like 'Adventure', 'Wizard' etc. The story deals with the heroism aboard the ill-fated troopship 'H.M.S. Birkenhead' and the birth of 'women and children first'. It is told in present tense and first person which carries the strength of the story.

Although I have picked on my three favourite stories - there are many others that would have sat well within those nostalgic years. Despite that every story in this collection brings it's own resonance - some that make you stop and think. This is just good, solid storytelling at it's best.

This collection is available on Kindle or paperback versions.
Posted by Ray at 15:46