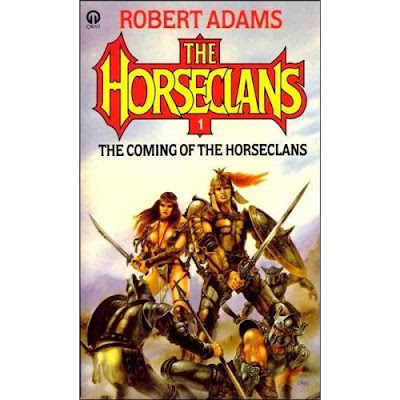 Franklin Robert Adams was a career soldier born in 1933 and died in 1990.
He is considered to be one of the earliest writers to depict a post-nuclear holocaust world.
The Horseclans saga comprises 18 novels published between 1975 and 1988.
There is a mix of sci-fi and Arthurian romance. The setting is that part of America to the west of the Mississippi and stretches from Canada to Texas.
Heroes come in Undying form and characters like Bili Morghun (aka Bili The Axe) are, at least, a century old yet never show signs of age. They are also telepathic through which they are able to communicate with their allies a pack of sabre tooth tigers.
The art work for the Orbit paperbacks (an example shown) has that heroic vibe to it.
Robert Adams was a good storyteller and his descriptive passages were first class. Added to that was his knowledge of weaponry that gave an authentic feel.
All the books about the Horseclans inter-connect so, although each book has an ending, there is not really a novel that can be classed as the usual stand alone.
Tribal classes and weird, suspicious relgions turn up many illustrative of a point that the author feels that he has to make - like a mask covering his own thoughts.
The books in the series are:
1. The Coming Of The Horseclans
2. Swords Of The Horseclans
3. Revenge Of The Horseclans
4. Cat Of A Silvery Hue
5. The Savage Mountain
6. The Patrimony
7. Horseclans Odyssey
8. The Death Of A Legend
9. The Witch Goddess
10. Bili The Axe
11. Champion Of The Last Battle
12. A Woman Of The Horseclans
13. Horses Of The North
14. A Man Called Milo Morai
15. The Memories of Milo Morai
16. Trumpets Of War
17. Madman's Army
18. Clan Of The Cats
There are two anthologies of Horseclans related short stories simply called Friends Of The Horseclans 1 and 2.
I picked up 'The Coming Of The Horseclans' quite by chance but Googling has not really brought up anything much except for brief biographies of the author and a list of his works. Nor had I come across this series.
Some of the books are, it appears, available for download.
The first three books certainly have the feel of a trilogy about them and I have ordered the next three from Amazon.
Posted by Ray at 20:41

Fan of the novels. I met Adams once at a convention, a big, robust man, as you would imagine, and quite personable.

Another series of his you might like was the Castaways In Time. It was one of those modern man thrown back into the Middle Ages of Europe who uses modern knowledge to improve the lot of people and defeat invading barbarians.

Thanks, Randy. Came across Castaways In Time on the Fantastic Fiction site. Fewer books in that series but on the strength of the first Horseclans book alone I will take a look at the other series.