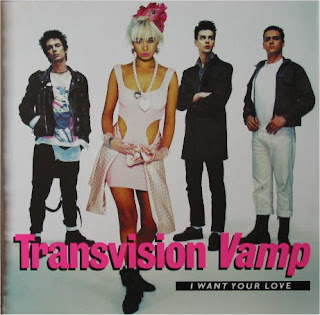 A while back I went through a box of old cassettes and came across three albums by a group called Transvision Vamp. So I put them through the cassette player and found myself quite mesmerised.
Tranvision Vamp comprised Nick Christian Sayer, Dave Parsons, Tex Axile, Pol Burton and, as lead singer, Wendy James.
The sound post punk/rock and Wendy James had the right punk, rebellious voice that their music needed - yet could gentle down to the ballad like songs 'Sister Moon'.
Wendy James just had this voice that made people sit up and listen.
The group signed to MCA in 1986 and released a debut single 'Revolution Baby' in 1987. But 1988 saw the group break into the charts with 'I Want Your Love'. However, they would have to wait until 1989 for things to really hot up with hits like 'Baby, I Don't Care', 'The Only One' and 'Landslide Of Love'.
While single success seemed more of a swings and roundabout affairs the Tranvision Vamp albums fared better with 'Pop Art' peaking at No.3 and twenty odd weeks in the charts while the far more successful 'Velveteen' went in straight at the top spot and spent thirty odd weeks in the chart.
Unfortunately, MCA were not keen on the third album 'Little Magnets vs The Bubble Of Babble'
and delayed the release and by the time it hit the shops in 1991 Transvision Vamp had disbanded.
Despite this Wendy James stayed signed to MCA and had a solo album 'Now Ain't The Time For Tears' from which the singles 'The Nameless One', ' London's Brilliant' and 'Do You Know What I'm Saying?' were released with disappointing results.
A shame as Wendy James was trying to make her own way - sure there were shades of Transvision Vamp there but a hint of a new direction. Something that is illustrated by the Transvision Vamp albums as though they knew the difference between what is commercial (ie the chart hits) and goes to show that sometimes record companies don't - 'Sister Moon' being an example - and the beauty of 'Velveteen' that, in my opinion, made the album a success.
Reading between the lines Wendy James knew what she wanted - she wasn't 'Born To Be Sold' but determined to write her own history.
In 2004 she attempted a comeback with a band called 'Racine' which came to a halt.
In my view Wendy James did write her piece into music history with Transvision Vamp.
Posted by Ray at 16:07

I am not even gonna waste my time doing my usual speel..

Her current Facebook page is official but it is basically a joke..

It is not the first time Wendy has had a fake site pretending it was actually her..

This is what Wendy James REALLY looks like in 2010..

You will NEVER see these on her official site..

She has a cocaine habit which she is very keen you don't see..

Everything you need to know and so much more..

The world's most obviously "rehearsed" interview and Wendy proving why she need never worry about being an actress..

she can't even fake the regretful sighs with any sort of conviction..and yeah the guy is just average size..she really is THAT small in reality..

and that is the "band" she claimed were her bestest friends ever..

They are playing a bowling alley while people are STILL bowling by the way..

They played their last ever gig in April 2008..

Wendy has not played live ANYWHERE since then…

(yep over 2 years but she would be very grateful if you could forget that..cheers.)

The Astoria gig was cancelled because of very poor ticket sales..for instance.

She then found a new best friend in Cocaine..

While she whored herself in Australia deejaying while trading on Transvision Vamp.

Just type anything you want to know into the search engine at the top and I do MEAN anything...cocaine,costello,cock etc...

and here's the one with the BIG photos..

Notice the lips do ya..?

(Wendy denies she has had implants in her upper lip..)

I dare ya to say you've seen THOSE before..

This is what WENDY JAMES really looks like in the 21st century..

All her official photos are airbrushed to hell and back to hide her problems..

Coke does that to you.

Type ANYTHING into the search engines on the sites and mostly you will get an answer..

Maybe not the answer you want to hear.

But a truthful one.

DRYBABY - What people do with their lives is down to them - believe me, I have no interest in them. There are those who cannot handle the sudden fame while there those who can grow.
The only thing that is important - to me anyway - is the music.

Never believe anything that's said by those motivated by hatred.

Oh you are a tiresome loser dryloss!

Just Google 'Drybaby sad touch typist troll' follow the Amazon links and read the public comments about Dryhump. Discover why Wendy sacked him and how he would love to be bare ass whipped by her. Unfortunately for Drybaby . . . . That is never going to happen!
Drybaby Anthony Clinton an Irish irrelevance!

Dryloss !!!!!!!
What a very appropriate name for Anthony Drybaby Clinton.

Just Google Drybaby sad touch typist troll and follow the Amazon links. Read the reviews and then for a real insight into the git known as Dryloss read the public comments.
They totally crucify him in a very entertaining and comical way!
Dryloss!!! I love it !!!

I used to read Drybaby blogs back in 2007/2008. Whilst controversial he used to be quite funny and entertaining.
WHAT HAPPENED????
I just spent a very disappointing 15 minutes reading his current blog . . . . full of self pity, none of his old humour. A very sad state of affairs.
I think he mentioned disappearing in a recent blog entry.
If such sad, unoriginal and plagiarised material must be used in a blog it is doomed to failure.
Keep the reader entertained or lose it!!!!!!
Whatever happened to the once witty Drybaby? Did someone rain on his parade?

Anthony Drybaby Clinton doomed to be the 'ONLY ONE' signing in to his 'BLOG DEAD IN THE RIVER'
'DRY BABY I DON'T CARE'
Now you have lost, just vanish like the refuse down my drain and never come back again.