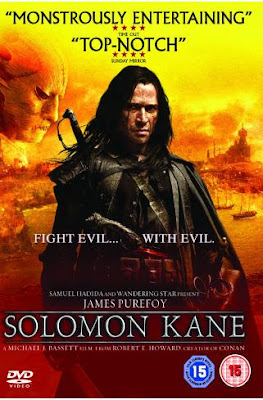 
Writer/Director Michael J Bassett has produced quite a good movie featuring an almost forgotten character created by Robert E. Howard.
Howard is better known for the stories that chronicled the life of Conan who is the subject of a new movie.

Solomon Kane is a privateer/mercenary waging war on the North African coast in 1600. It is here that Kane encounters the Devil's Reaper who has come to claim Kane's soul.
"I'm not ready for Hell - yet." Kane tells him as Kane makes his escape.
Kane takes refuge in an Abbey where he begins his journey towards redemption. But that road is long and has many routes - some of them painful.
As he journeys towards his West Country home he is given food and shelter by a Puritan patriarch (Pete Postlethwaite) and his family. Kane finds himself drawn towards the daughter Meredith (Rachel Hurd-Wood)
The West Country of 1601 is plagued by an evil band of Raiders and ruled over by a man called Malachi. It is not long before the group of travellers are attacked by the Raiders resulting in the deaths of the males and the abduction of Meredith.
Kane goes after them to rescue Meredith.
To go further would mean a whole bunch of spoilers but Solomon Kane's journey to redemption does draw the viewer in.
James Purefoy gives a faultless performance as Kane.
One other performance comes down the combination of costumier and Samuel Roakin's acting as the leader of the Raiders - a pure evil presence on screen.
The rumour mill has this film as the first of a trilogy.
Posted by Ray at 12:53

News of this film somehow passed me by, but I'm sure glad to hear it. I enjoyed ALL the Kane stories, and more than once.

While Kane is not as famous as Conan, it's a stretch to call him "almost forgotten." Kane has been doing pretty darn well: he's been the subject of two comic series in the 1970s, a recent RPG sourcebook from Pinnacle, an ongoing comic series from Dark Horse, multiple appearances in anthologies, some of which are still in print - all this before the film came out. I can think of plenty of characters who can't boast appearances in RPGs, comics and books.

Taranaich - Got no arguement with what you say. I knew of Solomon Kane but he seldom gets a mention.
But there you go.
Thanks for the heads up regarding the Dark Horse series.

I've been wondering about this film. Considering the track record of movie making in general, I had grave misgivings about what might arrive. Glad I was wrong.

I understand what you meant by "almost forgotten," Ray. Folks like us know. But the general public seems to only know Conan.

Yes, I enjoyed the Kane stories some 30 years ago. I've seen this and Purefoy captured the tortured spirit of Kane very well. I'm looking forward to the next two films.