THE KILLING TRAIL by Chuck Tyrell 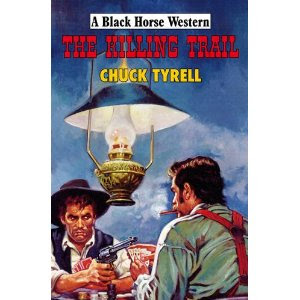 The average Black Horse Western runs between 130,000 and 145,000 words and Chuck Tyrell is one of those writers who do not waste a single word.
Whether Chuck Tyrell is writing about character, location or objects it is done in a seemless way that it is like a painting taking shape. Word pictures.
The centre of this story is Nat Dylan who is on the vengeance trail.
On minute fifteen year old Nat is having a crush on the 19 year old schoolmistress, Rebecca Shoemeister, - the next he is struggling with the news that his three older brothers have been killed by a man named Jared Carter. Picking up his brother's Remington he vows to see Carter dead.
Five years on and Dylan and Carter find themselves in the same place at the same time which means that things have to come to a conclusion.
There are a fistful of threads to this story that carries it above the usual revenge tale. Nat Dylan grows in stature and character as the story builds towards the conclusion. Then there is the question of honour and, as the reader discovers, there is more than one kind of honour here.
'The Killing Trail' by Chuck Tyrell is a June release from Robert Hale Ltd's Black Horse Western range.
Posted by Ray at 10:50

Thanks for the review, Ray, it makes me want to buy the book. Then again, if it's written by Chuck Tyrell I already know it'll be worth reading!

Agree - a great book. I'll be reviewing this later in the week myself.