THE BEST OF BATTLE 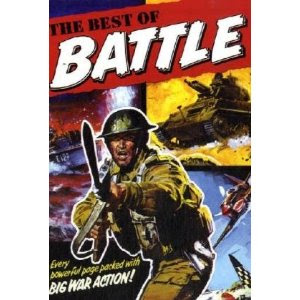 "We were looking for inspiration from movies like 'Dirty Harry' and the spaghetti westerns: in the case of 'RAT PACK' we got it with 'The Dirty Dozen'."
And there certainly are influences at work in these stories.
Robert Shaw from 'Battle Of The Bulge' with a touch of Red Grant is the inspiration for 'Hellman Of Hammer Force.'
A Clint Eastwood/James Coburn 'Cross Of Iron' character has to be behind Major Eazy.
'Battle' Comic ran from the early 70s to the 80s but I have no recollection of this so reading the extracts from the various series has certainly been an eye opener.
Movies, obviously, played a part towards the inspiration but the idea of comic featuring stories that had Germans as heroes or anti-heroes must have some links to the books of the likes of Sven Hassel.
One grouse - 'HOLD HILL 109' ran for six weeks, according to the intro so I feel a little cheated that the book gives just four of the episodes.
Still I enjoyed the rest of this compilation from Titan Books that featured the likes of 'D-Day Dawson', 'Johnny Red', 'Charley's War' amongst the 18 featured stories.
'Darkie's Mob' and 'Johnny Red' have been issued in all new reprint editions with 'Rat Pack' and 'Major Eazy'. Also, in 6 volumes has been the complete reprint of 'Charley's War'.
There were some articles on 'Charley's War' at http://tainted-archive.blogspot.com
Posted by Ray at 14:43