IN MEMORIAM:THE REALITY OF WAR 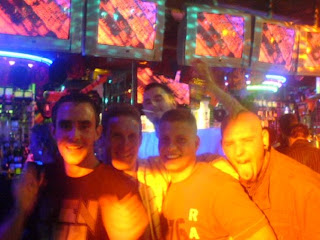 At 10 am this morning one of the people in this photo died fighting the war in Afghanistan.

Jon Monk and my son, Jack, were inseparable from the word go. A pair of jokers who did everything together. School, working as fishmongers, Army Cadets - they did it all. The best of friends who were going to join the Army together.
Except that Jack got married and Jon went into the Army. He served for his allotted time and was posted to Northern Ireland and then to the Iraq conflict.
Life in civvy street did not enthuse Jon and he re-enlisted in the army and was sent out to Helmand Province in Afghanistan.
Last night Jack and Jon were conversing on Facebook and making arrangements for a night out at the end of this month - but the Taliban made sure that will not happen.
Rest In Peace - Jon. You will be missed.
And we send all our love, sympathy and condolences to Jon's family.

Jon is on the left or the front - and that is the way we will remember him.

Further reading regarding Jon's death can be found at http://helmandblog.blogspot.com
and http://ukdf.blogspot.com
Posted by Ray at 22:30

I'm sorry to hear this, Ray. My condolences to his family and yours.

Dear Ray, I used to work with Jon and would very much like to attend his funeral, possible with a number of other old colleagues. If you could post the funeral date/time and location on your blog that would be appreciated. If not and you would prefer a less public conduit, please email me at amstapley@hotmail.com. Thank you.

Anonymous - I know nothing about the funeral arrangements but I'm passing info to Jon's family.

That was a very nice blog john would be proud

Condolences to Jon's family and friends. It's a hard thing to take in, but, as you say, remember him as he was. He looks like a fine young man.