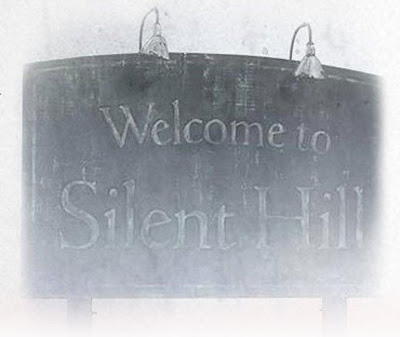 SILENT HILL is a small resort town in New England by Lake Toluca.
Back in the 1600s it was home to a tribe of native American indians until the arrival of a group of settelers. They lived in harmony until an epidemic decimated both populations. In the 1860s a prison was built here to house prisoners of war taken during the American Civil War. After the war it became a penetentiary.
In the 1880s the area was struck by another epidemic that led to the building of the Beechwood hospital across the lake in the suburb of South Vale.
Visitors to Silent Hill can hunt in the forested hills or fish from the banks of the lake. It is by the lake that can be found the Lakeside Amusement Park, The Lakeview Hotel and the historic lighthouse.
In Old Silent Hill can be found the Midwich Elementary School on Midwich Street while on the corner of Bachman Road and Bloch Street is the site of the town's only church. Across the bridge is the commercial area where both the police station and post office are located along Crichton Street. Turn left at the post office in to Koontz Street to where the Archamellia General Hospital is situated.
It was a pleasant little town - until the The Order, a cult dedicated to raising the 'Older Gods', took over the town.
Now Silent Hill is a ghost town shrouded in fog.
The story is encased within four computer console games (yes-I know that there are six titles and I will mention the other two later).
The first story (1999) concerns recently widowed Harry Mason and his seven year old adopted daughter Cheryl. Each year they have spent their vacation at the Silent Hill resort and Harry sees no point in not spending this vacation there. As they are driving along the road Harry swerves to avoid a shadowy figure. He crashes the car and is knocked unconcious. When he wakes up he finds that Cheryl is missing. As Harry searches for his missing daughter he discovers more about Cheryl's early life and her connection to Silent Hill.
The second story (or game -2001) has the protagonist, James Sutherland, receiving a letter from his dead wife, Mary, saying that she is waiting for him at their 'special place' in Silent Hill.
The third instalment (2003) begins in a mall in South Ashfield where 17 year old Heather Morris is having a nightmare. When she wakes up she finds herself persued by a Chandler/Spillane style private investigator. He has been hired to bring her back to Silent Hill though he does not know why. The story line here links quite neatly to story one.
Travis Grady in the fourth story (2007) is a truck driver who happens upon a burning house. He stops and rescues a child who's life he saves. But when he wakes up in hospital no one knows about the little girl - this game is called: Silent Hill:Origins and is the prequal to the first game and the two link together.
The other two games are the sixth instalment (2009) called Homecoming which is set in the neighbouring town of Shepherd's Glen and I cannot comment as I am only a quarter through.
The other is Silent Hill 4: The Room (2004) which has not connection apart from the 'bad guy' being an undead serial killer mentioned in Silent Hill 2. It is repetitive and I doubt if the game would have 'sold' without the addition of the Silent Hill 'name'.
Silent Hill is what is known as a survival horror game - a term that was coined with the arrival of 'Resident Evil'. One reviewer wrote of the first Silent Hill "Konami's first entry into the horror genre - while not quite up to the mark of Capcom's Resident Evil 2 - is a great beginning."
In my view, he is wrong for Silent Hill is superior.
First, the game has a spooky atmosphere that has a tense soundtrack by Akira Yamaoka and, unlike other games, Silent Hill with its nods towards H.P.Lovecraft and Stephen King makes the player think. It is not necessary to kill every 'nasty' that the player comes across - though there are times when you have no choice.
The are puzzles and there are clues to be pieced together and there are four or five endings - but to reach that end it is all down to the decisions that the player makes.
The town's history at the top of the page is gleaned from the games and you will not read this in the game booklet - you work it out for yourself.
The disadvantage with these games is that the first story came out on the Sony Playstation while numbers two, three and Origins came out on Playstation 2. As it happens games that originated on the original Playstation can be played on Playstation 2 but the first game is hard to come by which makes it difficult for anyone wanting to continue on from Silent Hill:Origins - in its own way it makes the story hard to comprehend.
With consoles evolving to the Playstation 3 and XBox360 it seems to me that a digitally enhanced omnibus edition of the four linked games should be issued to players new to this story.
The downside is a fear that this is a series that could go on forever and just develop into a clone of itself. It is the feeling that I get from the latest game and I would prefer to see a title like Silent Hill:Resolution whereby the protagonist destroys the Order and Silent Hill returns to normal. The team at Konami have suceeded in bringing an innotive game style into being and should not do Silent Hill to death as the four main games have their place in the horror genre.
For Silent Hill is the horror comic and the horror story brought to life. Live it. Breathe it. This is the horror movie that you control.
Posted by Ray at 08:53

I've never been able to master these computer games, despite trying many times over the years. Shit, I'm still stuck on Tomb Raider.

Which one? Got the complete set and completed them all bar the latest.

the first bloody one

Ian - I'm the same. The only games I can handle are the old space invaders and pac man. I often watch my kids playing some of their games and I must admit I'm not cut out for them. I do like racing games though.

Gary and Ian - I am hopeless at Sonic. Sandy's good at it though.
Tomb Raider Anniversary is easier to handle - it's the first three games rolled into one and the controls are far better.
I have about 12 games for the XBox 360 and about the same for Playstation 2 - but they are all sets.

I'm completely illiterate when it comes to games.