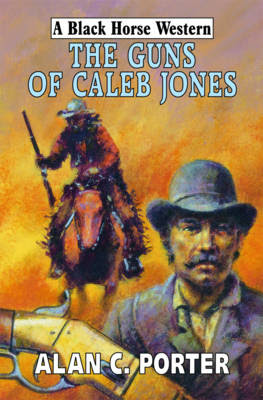 Caleb Jones rode in to Desert Bluffs to make peace with his daughter whom he had not seen in twenty years but Aguilar's raiders, from across the Mexican border, robbed him of that chance, killing her and taking his granddaughters. It was down to Caleb to get them back whatever the cost, so he rode with guns blazing in an explosive rescue mission into Mexico that seemed doomed from the start. But Caleb was not a man to accept defeat lying down and when his guns spoke men listened or died.

Since 1991 with the publication of 'WEST OF THE PECOS' Alan C Porter, from the UK's west country, has written about twenty one Black Horse Western novels.

It would be easy to say that he wrote action packed page turning books. But.......

"The conestoga moved through the night hauled by a team of six. A light wind caused the canvas to billow and slap about its curved, wooden ribs. Shadows, silent and ghost-like flitted over the land as wind driven clouds raced across the mottled face of the moon."

So reads the opening lines of THE GOLD HUNTERS (1992) as a reinforced conestoga laden with a million dollars is seconds away from being held up and the 'inside man' killed. Wagon, horses and gold all disappear and it is down to Treasury Agents Wes Hardiman and Ben Travis to reclaim the gold.

There is a rapport between Hardiman and Travis that like many a Porter character makes them solid and believable. Also, his descriptive passages have that quality that makes the reader 'see' and 'hear' what he is writing about.

In some of his books, like 'THE GATES OF HELL' and 'THE CAT WAGON' he includes what is termed 'adult content' but these are led up to in a natural way that is reminiscent of the novels of the Sixties but descriptive enough in the modern sense without being sensational.

As with other western writers that I have written about Alan C Porter has impressed me and I'm looking forward to reading 'THE GUNS OF CALEB JONES'. This book can be pre-ordered through the usual outlets.

If you told me Raymond Chandler had written the opening to THE GOLD HUNTERS I would have belived it. Magnificent writing.

I've not read this guy. Guess I'll have to - great review, Ray.

Or maybe I should have said Louis L'Amour. Either way very stylish and poetic.

Sounds like another author I really must get around to trying - I have one book of his, The Secret of Squaw Mountain. Looks like I'll have to dig it out!

David - I know what you mean. I would have loved to have interviewed Alan C Porter and find out who his influences are. Unfortunately he doesn't like publicity.

Steve - I have most of his books and his latest is on pre-order. The Secret Of Squaw Mountain is one that I haven't got - yet.

YOU HAVE BEEN GIVEN AN AWARD OVER AT THE ARCHIVE - http://tainted-archive.blogspot.com/2009/03/five-great-blogs.html