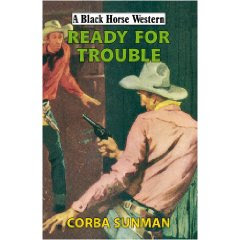 READY FOR TROUBLE
a Black Horse Western
by
Corba Sunman


When Clay Overman was shot at he suspected the worst for he had no idea who wanted him dead. Then the stream that watered the Bar O ranch ran dry and that was when his troubles really began. Soon he was fighting several scheming men who were intent on robbing him and his father of their ranch and their lives. He fought for what was his in a lawless land where everyone with possessions had to fight to keep what they owned. When the shooting started it seemed as though it would never stop and Clay's life was on the line until the very last shot desoite the fact that he was ready for trouble.

Corba Sunman was a writer that I was aware of for I had seen his books turn up on Ebay from time to time and noticed that they attracted a flurry of bidders. Fortunately, for me, a block of four books came up. Three of the books were by writers that I collected and one, 'Marshall Law' by Corba Sunman. Maybe everyone else had this book because I was the only bidder on this lot.

'Marshall Law' published by Robert Hale's Black Horse Western brand in 2006 concerned Deputy Marshall Jed Law's arrival in Buffalo Creek to deal with an outbreak of rustling that was pulling two ranchers towards a range war. From the start this book turned out to be a page turning action packed ride.

Corba Sunman has written more than twenty books since his debut Black Horse Western 'Range Grab' in 1996. His hero here is a Texas Ranger, Brad Devlone, who works undercover with his badge tucked behind his belt. Again this is an action packed novel that keeps the reader guessing but suspecting who the guilty parties are.

Corba Sunman is another Black Horse Western writer who attracts silly money for his books on Amazon and that goes a long way to explain why this British writer gains a lot of attention when his books turn up on Ebay.

I am sure that Corba Sunman will keep us readers entertained for some time to come.

I have a few Corba Sunman books but as yet haven't read any of them. Sounds like I should.