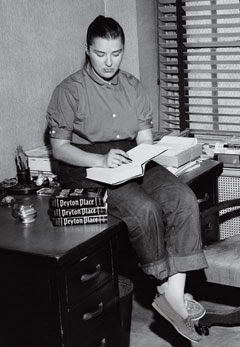 This was going to be my Friday Forgotten book.
In 1959 I was given a book token as a prize for an English composition that I had written. I spent all of 3/6d on a book because the cover had a picture of a High Street that looked like the one in the Kentish village of Farnborough (near Orpington that is). Not the best reason for buying a book but - .
The Friday English lesson at school was a reading time. We took in our own books and just sat and read for 40 minutes.
So when I took 'Peyton Place' to school I got ribbed because I was reading a women's book. That was until I showed them a couple of pages. This, in turn, caught the attention of our teacher, a very religious man, who wanted to know what was causing amusement. When he discovered the source he told me that I was not to bring 'that sort of filfth' into his classroom again.
So back to that but - I learned that the events of the book and the picture on the cover put the contents not just in small town America but on my doorstep as well. That the aspirations of Allison McKenzie and the abused lifestyle of Selena Cross happened here as well as over there.
Grace Metalious was born in the Franco-American mill town of Manchester, New Hampshire in 1924 as Marie Grace De Repentigney and died in a Boston hospital of liver failure in 1964 aged 39.
She was born into poverty and lived that way despite marrying George Metalious at the age of 18 in 1943. They had known each other at school and he was training to become a school teacher. Together, they had three children but Grace was something like an obsessive writer who asked neighbours to look after her children or sent them out play while she laboured at her typewriter.
In 1955 she sent a manuscript titled 'The Tree And The Blossom' to the agent Jacques Chambrun who had represented W. Somerset Maugham and the 'Shane' author Jack Shaeffer. He, in turn, passed it to various publishers until it hit the desk of Lippincott's manuscript reader, Leona Nessler, who liked the story but it was passed up by the publishers.
When Leona Nessler went for a job interview with Kitty Messner, the President of Julian Messner Inc, she mentioned the book to her and Kitty said that she would take a look. Instead of passing it on Kitty Messner read it herself and saw, immediately, the potential.
The title was changed to 'PEYTON PLACE' and in the first month sold close to 100,000 and was already on the best seller lists a week before it's release on the 24th September 1956. It went on to sell over 12 million copies.
1957 saw the toned down movie open in the US something that was virtually unheard of with an unknown author with a new book on the stands.
PEYTON PLACE
The book follows the fortunes of aspiring writer Allison McKenzie, the illegitimate daughter of Constance McKenzie who had an affair with a married man and returned to Peyton Place as a 'widow'. Also, there is Selena Cross who works in Connie's shop and is Allison's friend. Selena is the victim of abuse and incest by her step-father, Lucas Cross, and witness to the abuse of her mother Nellie.
The Cross family live on the 'wrong side of the tracks' a place that is shunned and that nobody wants to get involved with. While Selena is branded as 'a girl like that' the man-hunting immorality of 'respectable' Betty Anderson is acceptable.
As a result of all this immorality, incest and abuse it is Selena Cross who gets pregnant by her step-father. A caring Dr Swain arranges an abortion and forces Lucas Cross to leave town. When Nellie, Selena's mother discovers the truth she hangs herself and, in a memorable, it is Allison who discovers her.
The end of the book may have that feel good feeling but it is the bulk of the book that is full of well-drawn real people that lives on.
In the original typescript Grace Metalious had to change Lucas Cross from being Selena's father to step-father as it was thought that America was not ready for full-blown incest. Well, there are enough clues in the book that shows the author's original intentions.
On it's publication 'Peyton Place' was considered so outrageous that it was banned in Canada and some American States and small groups and church leaders jumped on the band wagon to let everyone know that the book could corrupt the children.
Still in the UK the morality groups had something different to get worked up about - 'Lady Chatterley's Lover'.
For Grace Metalious success reads like one of those that tells the rags to riches story. In fact, she could not handle the success and the subsequent novels - 'Return To Peyton Place', 'The Tight White Collar' and 'No Adam In Eden' were not as good. There were flashes of 'the real' Grace Metalious observations but they were few and far between. It is as though she had already put everything into one book.
She died in 1964 just before the release of the watered down soap style TV series.
Despite it all 'Peyton Place' has a place in fiction history that should not be forgotten. In many respects it was a first in many ways and it, definately, is not just a woman's book.
Posted by Ray at 14:34

Ray-let me put this up next week? I loved this book when I was a kid. And the movie, tv series, all of it.

Ray, What a great review with all the history. You have me now on my way to learn more about Grace Metalious. I did find this great quote from her in answer to her critics: "Even Tom Sawyer had a girlfriend, and to talk about adults without talking about their sex drives is like talking about a window without glass."

It always surprises me how heated people get about frankness in any fiction. I suppose it shouldn't since, like you, I was there when supposedly educated people were dismissing the likes of Peyton and Chatterley as "filth". I did think the world had put these attitudes behind it, but just lately the drive for censorship has been showing up again, perhaps as part of the wider movement for political correctness.

A great book from my formative years. I've read it at least three times.

I recommend THE GIRL ON THE BESTSELLER LIST, a sort of take-off, by Vin Paker.

Brings back memories - I can still visualise the paperback cover I read in the 1960s. I too was drawn by the realism in the descriptions and wondered what the fuss was about. I also read the Tight White Collar, but sadly can't remember it now, some 40 years later!
- Nik (Ross Morton)