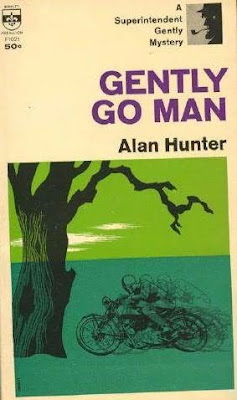 GENTLY GO MAN
by
Alan Hunter
First Published 1961
Alan Hunter was born in 1922 in Norfolk where he died in 2005. His first Superintendent George Gently book 'Gently Does It' was published in 1955 and continued through over forty novels.
'Gently Go Man' is set, as are most of the Gently novels, against a Norfolk background.
Johnny Lister had been to a jazz club with his girlfriend. On their way home they meet with an 'accident' and Johnny is killed. Evidence shows that it may have been murder and that Lister's girlfriend's ex-boyfriend was the offender.
The local policeman, Detective Inspector Setters thinks that he has everything tied up but others call in the yard.
Enter the pipe smoking Superintendent George Gently from the comfort of his lodgings in North Finchley. He sits in his black Rover 75 at one end of a straight stretch of road known as Five Mile Drove in the middle of which is a solitary tree - Gallows Tree.
Gently drives up the road and accelerates pushing the car towards the ton - and within those few minutes he understands several things.
'Gently Go Man' is set amongst the young sixties rockers and presents a fairly accurate picture of the lifestyle and personalities. Throughout the book is another 'narrator' who speaks his own thoughts on the police investigation that lends another observation to the proceedings.
Alan Hunter admired Georges Simenon's 'Maigret' and George Gently operates in a similar fashion. He gets to the offender by talking to people and by observation until he gets to the truth. In short Gently is a good old-fashioned copper in a good old-fashioned detective novel.
The BBC did film this book - but I don't think that anyone read the book. The only things that the BBC production and the book had in common was the title and the main character.
A pity really as this is a really good story (as are all the Gently books) and not as cut and dried as the original investingating officer, Setters, thought.
Alan Hunter's George Gently belongs to that era when detective novels were just that.
Posted by Ray at 08:45

Ray, You have brought to my attention another book that I was unaware of. Mucho thanks.