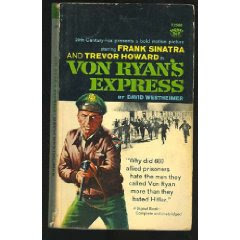 Von Ryan's Express was first published in 1964.
David Westheimer was born in Houston, Texas in 1917 and died 2005 in Los Angeles, California. During the second world war he served as a Captain in the USAAF as a navigator in bombers. He was shot down and spent the rest of the war as a prisoner of war.
Von Ryan's Express follows Colonel Joseph Ryan after he is shot down in Italy during 1943 and sent to Prisoner Of War Camp 202 known to the P.O.Ws as P.G. Doochentydooey.
He is greeted by Lieutenant-Colonel Eric Fincham of the British Army and, immediately, there is a clash of personalities.
The camp is run-down and morale is low. Although one tunnel had been dug before discovery and another under construction there had been no escape attempts had been made. As far as Fincham is concerned the men have been active with a campaign of mischief and mayhem designed to make life difficult for the Italians. The result of all this is that the camp Commandant has withheld Red Cross parcels and much needed clean uniforms.
Against this background Ryan, now the Camp's senior officer, begins to change things around. He is a very strict by the book and by the numbers officer that contrasts against the more casual style of his British number two. It is this clash which is, at times humourous while at others intense, that dominates the first third of the book.
As he whips the prisoners into shape his methods earn him the nickname Von Ryan. He still gets the job done. Despite opposition by the camp commandant Colonel Battaglia Ryan finds ways to get around the Italian's obstinancy to get the food parcels and the prisoners new uniforms issued.
When the Italians surrender the guards leave their posts and the time seems ripe for the P.O.Ws to just walk out of the camp and make for their own lines. However, Ryan urges caution as there is no knowing how far the Allied lines were or whether there had been another landing further north. He doesn't like the idea of hundreds of men wandering around the countryside and getting shot by the Germans.
When they wake the next morning the Germans are already in charge of the camp with plans to shift the prisoners to Germany by train.
Once aboard the train the action starts as the prisoners overpower the German guards and take charge of the train. Both Ryan and Fincham put aside their differences and work together in what is a rivetting second half of the book.
Von Ryan's Express is a great escape book with many interesting and well-drawn characters.
David Westheimer wrote a sequel in 1980 called 'Von Ryan's Return' - which in no way is a spoiler for the first book as the outcome of that book is one where you have to wait until the last page.
Posted by Ray at 05:47

The novel sounds good... I know the Sinatra movie is considered so-so but I've always enjoyed watching it.

I know this movie so well - love that running for the train climax. Never seen the book though - would love to get hold of it.

Wow! This sounds like an incredible read. No, I've never heard of it. Makes me proud to be a Houstonian, too. I'm going to have to find this book then watch the movie to which David refers.

BTW, you need to send Patti Abbott an e-mail and get your name on her list.

David and Gary - I love the movie too but the book is a lot better. There is stuff in the book that doesn't turn up in the movie. By the sounds of things this is a truly forgotten book.

Scott - thanks for the reminder and an e-mail has been sent. I don't think you'll be disappointed with the book.

Scott's right about the Houston connection. The Westheimers were a big family here, and one of Houston's prominent streets is named for them. I read this book after seeing the movie long years ago, and the book is definitely better. Westheimer's THE OLMEC HEAD is also pretty good.