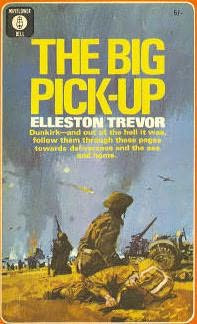 Elleston Trevor was born in Bromley, Kent in 1920 and died in Arizona in 1995.
During the second world war he joined the R.A.F as an engineer working on Spitfires. When he had a break he took to writing and saw his first novel published in 1943. He wrote several crime and detective novels under the name of Trevor Dudley-Smith.
His first best seller did not come until 1955 when Wm Heinemann published 'THE BIG PICK-UP'.
The Big Pick-Up is a realistic novel of the British retreat to Dunkirk and the epic evacuation told through the eyes of a handful of ordinary British Servicemen.
Hungry, weary and dazed Corporal 'Tubby' Binns and his men are cut off from their unit and left without transport and food.
At the start of the book they are prone and about to be dived bombed by Stukas and Binns' fear of death seeps through the words.
For the next few days they foot slog across a devastated landscape with no idea about where they should go or what to do.
In a telling scene they stop off at a deserted farmhouse and as night comes down they see a distant orange glow. For a moment they pity the poor people caught up in the air raid - they have no idea that glow comes from their destination - Dunkirk.
As they head north-east they pick up more stragglers some of whom die, while others leave or continue to live.
There are moments of humour - some grim, sometimes touching and there are times when it all comes naturally but none of it comes with that 'British stiff upper lip'.
The small group arrive on the beaches of Dunkirk during the lull in the bombing and they are elated, at first, but then they see just how many men there are on the beach. The long, straggling lines of men up to their necks in the sea waiting to be lifted off by the armada of little ships.
Then the bombers arrive - and all hell breaks loose.
To me The Big Pick-Up is the definative novel about the retreat to Dunkirk and would recommend it to anyone.
In 1958 (I think) there was a movie called 'Dunkirk' that starred John Mills, Bernard Lee and Richard Attenborough. It was made up with material from two books of which 'The Big Pick-Up' was one with John Mills taking on the role of Corporal Binns. The material taken from the book was faithfully reproduced in the film.
Trivia: Elleston Trevor also wrote as Simon Rattray and as the 'Quiller' creator Adam Hall.
Elleston Trevor also wrote a novel about the Battle Of Britain called 'Squadron Airborne'
Posted by Ray at 00:00

Ray, You have done a good job highlighting these forgotten war novels... I remember The Berlin Memorandum (also by Elleston Trevor) which was turned into a movie with Alec Guinness.

Fascinating review. As I mentioned in your Battle of Britain essay, I thoroughly enjoy Foyle's War. In one episode, all the boats that could float crossed the Channel to pick up soldiers at Dunkirk. The little moments in Foyle's War--like the moments you mention in your review--remind reader/viewer that real people wage war, even if they don't want to. The movie Atonement was the first real glimpse of Dunkirk. The scene you reference (seeing the orange glow) is haunting. I'm going to have to find this book.

More trivia: Elleston Trevor's versatility didn't end with the Simon Rattray and Adam Hall books -- or even Trevor Dudley-Smith. As a small child, I was a great borrower from the library of his books about Deep Wood which written were in a "Wind in the Willows" vein. Delightful moles, owls, badgers, etc. with appealing illustrations. Anybody else remember these? Or are they Elleston Trevor's really "forgotten" books?

"As a small child, I was a great borrower from the library of his books about Deep Wood which written were in a "Wind in the Willows" vein."

Ditto. Except I remember the name as being "The Wild Wood". (As in Kenneth Grahame.)
"Mole Castle" - Mole returns to his ancestral home.
"Badger's Moon" - an incredible mixture of science fiction and Wind in the Willows.
And all published before 1955.
Yes -- these are *definitely* his forgotten books -- I've been searching for years, and can't find any of them.