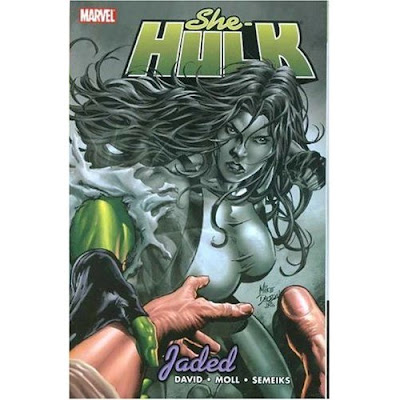 Each Christmas I buy my children a 'special' present - one that is just from me to them. For the first time I was a bit stumped for something to give to my youngest son - that was until I read an article on 'The Essential Silver Surfer' on THE TAINTED ARCHIVE blog (see panel for link). Said son was overjoyed with that choice.

As I browsed along the shelves of 'A Place In Space' one of our two local comic stores I had to smile at other books in the 'Essential' collections. There was the first volume of 'The Punisher' in his original costume - which was pleasing as it won an arguement with my eldest son.

Usually, when I go into these shops it is in search of something specific and I, rarely, browse. However, on this occasion I stopped for next to The Silver Surfer was 'The Essential She-Hulk'.

As I flipped through the pages it was like going back in time.

In the fifties parents were warned about a new 'thing' coming in from America - it was called 'horror comics'. Parents were warned by 'concerned' groups that these would be damaging to their children. So, we seven and eight year olds began to read these 'Amazing Stories' and 'Weird Tales' that had no effect on us whatsoever - except stimulate our active imaginations.

With these comics came the likes of 'Superman', 'Superboy', 'Supergirl' and 'Superwoman' that were followed by 'Marvelman' and 'Marvelwoman' etc. And, of course 'Batman'. For every man there seemed to be a woman like 'Spiderwoman' and 'The She-Hulk'.

When we moved to Orpington there was a shop at the end of the High Street where comics could be exchanged. I don't know how the proprietor made any money as kids would go in with a bucketful of comics and come out the same way. I never saw any money change hands.

The proprietor was a cadaverous old man with a mane of long white hair. The shop was long, narrow and dark and lit by single, low watt bulb. All the shelves were piled high with comics from the weird to the wonderful and just looked like the setting for some horror movies.

In the early sixties the shop just closed. Many of us just assumed that the old man had died. We turned up as usual to find the shop being cleared out - the workmen were just dumping the comics into cardboard boxes and leaving them out the back. By the next morning they had all disappeared - well, we had all climbed over the fence and helped ourselves.

A couple of years back I wandered back down the High Street and was surprised to discover that it was a comic shop again. I mentioned this to the new owner who was intrigued to hear about the building's past.

As the shop has changed - so, too, have comics. I do wonder how a twelve year old back in the sixties would see something like Frank Miller's 'Sin City'. I guess back then we wouldn't get to see it for it would be on the top shelf.

I was reading James Reasoner's blog (Rough Edges - link on the panel) on the new 'Hulk' movie the other day. The boys and I had seen that movie - but it reminded me that originally the Hulk had been a 'bad' guy until he got his own comic. When he became a 'good' guy I can recall that, in one instance, his adversary was Ben 'Thing' Grimm before he became part of the Fantastic Four.

It could be quite confusing at times characters that were 'bad' guys in one superhero comic would turn 'good' in their own - like Submariner or The Silver Surfer.

While I was in the store they were doing a survey and one of the questions that they asked me was whether I preferred Marvel or DC. I looked at the chap and said that they were just labels for a publisher and that when I was a kid it was the characters that we liked - and when it comes down to it who really cares who the publisher is? It's like asking me whether I wear Nike or Reebok - I wear trainers but I prefer the ones that fit me and I feel comfortable in. I have never bothered about the label on anything. He might as well have asked whether I preferred 'Superman' or 'Marvelman' - neither would be the answer for I read and enjoyed both characters.

I did get an unexpected Christmas present from my youngest son - he must have been thinking along the same lines as myself. He got me the graphic novel of 'Bat Lash: Guns 'n' Roses'. Well, as he's a fan of the group Guns 'n' Roses.....

A great post Ray - and glad my review of the silver surfer inspired your choice. It's a great book isn't it. I've just picked up essential Avengers and daredevil. These are fairly good value. Oh and I've only just discovered WATCHMEN - this is stunning.

WATCHMEN is tops and I'm hoping the movie doesn't screw it up. Will Eisner is probably my favorite graphic artist of the moment who I have to collect everything by. Incredible talent.

Lovely post, Ray. Our last comic store nearby just closed. The new ones, not near us, carry entirely different comics than this one did. You could still find Little Lulu there.