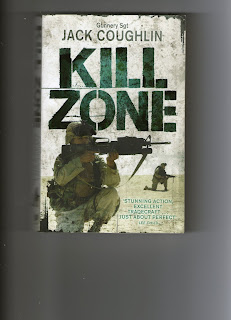 Although this first novel from a retired US Marine, Gunnery Sgt Jack Coughlin with Donald A. Davidson as co-author, was published in 2007 I have only just come across it.

The story follows the hero, also a Gunnery Sgt, Kyle Swanson a marine sniper.
Swanson is on holiday in the Mediterranean aboard the luxury yacht owned by Sir Geoffrey Cornwall, a former SAS officer turned designer, producer and seller of high-tech weaponry. Cornwall needs Swanson aboard to help sell a new type of sniper rifle known as 'Excalibur'.

In the US of A National Security Advisor Gerald Buchanan is quietly disposing of all who would oppose him as he plots a new order that would see certain aspects of the military made redundant while multi-millionaire Gordon Gates' private security corps (highly paid mercenaries) took on the 'black ops' roles.

In the Middle East, General Bradley Middleton is kidnapped and held hostage in Syria under the threat of being beheaded.

A rescue squad, that includes Swanson, is sent out on a clandestine mission to rescue the General - but it all goes wrong as the team are wiped out. It is the survival of Swanson that throws a spanner in the works for without his body it cannot be shown that it was the sniper who killer Middleton in a botched rescue attempt.

Questions arise like the fact that the operation was only known to a few so informed the captors? For General Middleton, a man confused, when he overheard his captors speaking in American English.

It is up to Swanson to find and arrest a General for whom he has no respect.

This novel rattles on at a fast and furious pace. Great characters that hold the attention.

I was impressed enough to track down the rest of the Kyle Swanson books.

For purists 'Excalibur' might be a problem - but it is a sniper rifle and that is all it needs to be. Just read and enjoy the ride.
Posted by Ray at 14:00