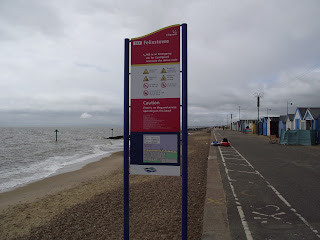 It has to be said that anyone who visits Felixstowe does so because they want to. It is where the A14 ends - there isn't anything else. Here the roads lead to either the port, Landguard Fort, Old Felixstowe or back the way the visitor came in.
It could be said that Felixstowe is an island that faces the North Sea and situated between the Rivers Orwell, Stour and Deben.

Now, the visitor is faced with this new sign. Really, most of the stuff is common sense. No climbing on the groynes; beware of currents and the like while on the reverse it tells people to keep their dogs on a lead; keep the dogs off the beach; clean up after the dog; take nothing from the beach (pocket a sea shell and what....? A fine). No bike riding. No launching boats.
Today the beach is....empty.
Actually, the sign is a waste of money - and it is quick to point out that there are no lifeguards on the beach. What it doesn't say is that for all the rules there is no one to back them up either.

Though this is just a minor irritant there are those who are a tad upset that Felixstowe has been named in a list of the 100 crappiest towns for 2013.
The spokesman has come out with a hopeful expression and fingers crossed behind his back with a list of things that may happen in the future. A new Pier, three new supermarkets....sorry. that is where I am going to stop.
Supermarkets - petitions flying around because no one wants them. Experience tells me that the protesters will be the first through the doors when they open.
Even the Pier has opposition and that from the people who look over the existing pier.

The funny thing is that Felixstowe has outlived the Romans, the Dutch, the Italians and the Germans.

Henry the 8th built a fort where Landguard Fort stands today guarding the estuary of the River Orwell and the North Sea. Just as well, because in 1667, the Dutch invaded England when they landed on the beach. 1,500 Dutch marines attacked the small force of The Duke Of York and Albany's Maritime Regiment of Foot under the command of Captain Nathaniel Darrell. Despite the odds Darrell's artillery fired into the pebbled beach creating instant shrapnel. Eventually, the Dutch called it quits and went home.
The fort remained in occupation through the Napoleonic wars; under the walls and guns 'The Mayflower' began the famous voyage to the New World; in 1913 it saw the port become the home of seaplanes. During the First World War Felixstowe was bombed by German Zeppelins and, in the second world war, by Italian aircrews.
Between the wars as before it was a holiday destination. In 1933 Billy Butlin opened up one of his fairground attractions on the sea front.
1953 saw Felixstowe hit by one of the most devastating floods.

Felixstowe has been home to the likes of John Mills; T.E. Lawrence (of Arabia) was stationed at R.A.F. Languard under the name of John Ross; and Wallis Simpson stayed here while she waited for Edward the 8ths abdication to be completed.

On film the movie 'The Sea Shall Not Have Them' not only uses the port and seaplane hangers as a location - but the German battery that fires on the Air Sea Rescue boats are in fact the guns of Languard Fort.
The River Orwell doubled as the Yangtse River in the Richard Todd movie 'Yangtse Incident' the story of the escape of H.M.S. Amethyst.

This is a resort that, in it's time, has attracted the likes of Status Quo, The Who, Led Zeppelin, Jimi Hendrix and Slade. Yet those days are gone and with it the Spa Pavilion Theatre.

So, Felixstowe has a lot of history - centuries where the town has been shaped by the events that have gone on in and around it.

In modern times shops have closed - big names have gone. It is a sign of the times and I don't see that three new supermarkets will change that. Felixstowe needs - and this is just my opinion - to re-focus and re-brand itself.
Opening supermarkets will not bring in visitors. Nor will opening up new restaurants and coffee shops (cafes even). Not without a sea front to attract visitors. More is needed.
OK, so the gardens by Town Hall are being re-designed but then that wasn't an area in need of a fix.
South of the Pier needs to be re-vamped to be in keeping with the rest of the sea front. Put the term pleasure with the word beach.

In 1997 a town up in Scotland - Wigtown - re-invented itself. It had a couple of second-hand bookshops but it re-branded as a Book Town. Something like Hay-on - Wye. With many Book Festivals it has thrived and, still does, despite the coming of the e-readers. Adaptability is the key to survival.
Felixstowe did put on a book festival but there were mixed feelings.
At least each year Felixstowe can boast a Vintage Car show and Hot Rods on the Prom and a decent Motorcycle Show. Also, there is the Art On The Prom Festival that draws a crowd. This year there will be an air display (weather permitting) to celebrate 100 years of the seaplanes and RAF Landguard.

As for stores and shops. Why not something like Ikea instead of a supermarket? And one of my own bugs is where in Felixstowe can I buy the latest CDs without having to go to Ipswich? And a bigger bookshop.

Isn't it a shame when you hear about Detroit - Motorcity - home of Motown and Packard going to the wall. Some of those still living there say the signs were there for all to see - they did too little too late. Money wasted on the wrong projects.

Don't get me wrong I like Felixstowe - I am happy where I live - but it needs to change to survive.