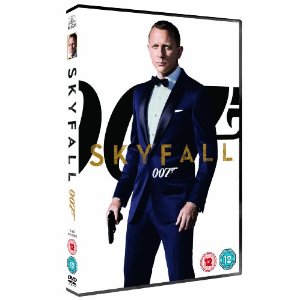 Here I sit with dvd in hand turn my face to the telly - yes, it is retro time. Bond and Beatles both turned up about the same time.

My wife couldn't see Daniel Craig as James Bond but after last night's viewing she has changed her mind.
No more gadgets? 'Did you expect an exploding pen?' asks the new geeky nerd Q. 'We don't do those anymore.'
That is until the famous Aston Martin comes into play and M dares Bond to use the ejector button.

'Skyfall' wasn't what I expected. I suppose that it should have been like all the rest; all that had gone before. But this film is pure adventure and despite the over the top villain Silva (Javier Bardem) who is a well thought through character - this was James Bond as written.


To be honest I had doubts about the script. M (Judi Dench) is in trouble as the sins of her past catch up with her. This puts the lives of MI6 agents around the world in danger. Politicians decide whether a secret service is needed in today's climate and the new Chairman of the Intelligence Services doesn't look as though he's on side.
My doubt was simple 'Colonel Sun' by Robert Markham. All the write ups that I had read seemed to hint that 'Skyfall' was something similar. As back in the day of 'Colonel Sun' we didn't believe that Ian Fleming would put M at risk in any way, shape or form.

On the other hand M wasn't a woman either.

Naomie Harris, as Bond's sidekick Eve, is an excellent partnership even if it does get off to a 'bad' start.

'Skyfall' is like a good slice of retro action movie. The script is a good one and Sam Mendes is in charge as director. If this is a representative of the new face of Bond movies then no 24 has to be just as good.

While Ralph Fiennes played an excellent character as the Chairman of the Intelligence and Security Committe, I couldn't help but smile at the choice of name - an ex-military chap called Mallory; son of the guy who destroyed 'The Guns Of Navarone' maybe?

'Skyfall' hits the shops (if any are left open) tomorrow.
Posted by Ray at 18:00