ALEXANDER BARON AND 'THE HUMAN KIND' 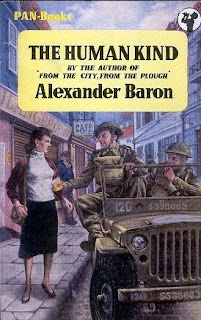 Joseph Alexander Bernstein was born during 1917 in Maidenhead, Berkshire but this was due to the fact that his mother had been evacuated from the family home in London's Bethnal Green because of the Zeppelin raids.
During the 1930s he joined the Labour League of Youth before moving further left to the Young Communist League though he never became a member of the Communist Party. At the time many in London's East End were following this route purely to stand up against the growth of the 'Blackshirt' fascism that made the Jewish community the prime target.
The young Alec wanted to join the International Brigade and fight Franco's forces in Spain but, as his later attempts to join the R.A.F. were to prove his eyesight failed him.
Despite this drawback Alec was conscripted into the Pioneer Corps and to fight a war not with a rifle but a pick and shovel.
As one of those who were first ashore in the D-Day landings in Normandy he did not realise that within a few years his experiences were going to lead to three of the best known war novels.

In 1947 Alec Bernstein received an advance of £50 from Jonathan Cape with the promise of a further £50 on publication for his first novel.

'FROM THE CITY, FROM THE PLOUGH'

This was the novel that changed the whole concept of the war.
It was a story of the 5th Wessex and of the men who lived and died. The ordinary soldiers who were farmers and rural tradesmen from the country and the clerks and office workers from the cities. It was a novel that was lauded because it was written by a former army corporal about ordinary people who trained together, arrived on the beaches and fought their way to Mount Pinchon where they were decimated.
Reality was the instances of sudden death - follow a character's thread and then nothing. Killed in action and you feel the sudden loss.
Also this book dismissed the celluloid stereotype of men on board ship writing home, looking whistfully back, or playing mournful tunes on harmonicas. Anticipation and fear of what lay ahead yes but not the other.

From The City, From The Plough' was a well received novel both sides of the Atlantic.
And it would go on to inspire other like Elleston Trevor and the Australian author, Eric Lambert to write in a similar vein. This is the original band of brothers.

'THERE'S NO HOME'
This 1950 novel was a change of pace.
The invasion of Scicily was over and the assault on Italy had yet to begin.
Weary from the battlefield a battalion arrive in the bombed out city of Catania where they are greeted by women, children and old men.
In a moment of peace lives begin to intertwine and unlikely relationships begin to form.
At the centre of the book is the love affair between Graziella, a young mother and Sergeant Craddock.
What this book does is highlight the impact  of war and emotions.

'THE HUMAN KIND'
A sketchbook of short stories and like the previous books containing elements of autobiography. These stories not only traverse the journey through Scicily, Italy, France and on to Berlin but the final story is set against the backdrop of the Korean War.

'The Human Kind' was turned into the movie 'The Victors' written and directed by Carl Foreman. Sadly, the exploits of the British soldiers became American.

This trilogy of war novels set the benchmark and sixty odd years on from their first publication it seems that someone has woken up to their importance for all three books have been re-published by
Black Spring Press and Sort Of Books.

Alexander Baron went on to write a total of 14 novels between 1947 and 1977.
He wrote the screenplays for 'The Seige Of Sydney Street' and the Australian western 'Robbery Under Arms'. He, also, wrote for the BBCs 'Play For Today' along with episodes for the TV series 'Poldark' and serials 'Jane Eyre' and 'Vanity Fair'.