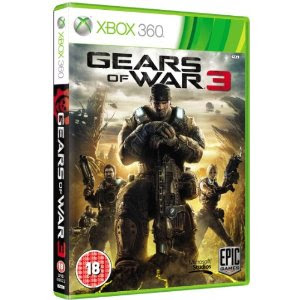 When I first bought an XBox 360 it came with a game bundle that contained Epic Games Gears Of War 1 and 2. I didn't like the first game as a)the enemy seemed to blend with the scenery and b) my character got killed too quickly despite taking precautions and using cover etc. So I gave them to my sons.
Gears Of War 3 came out in September 2011 and it was suggested that I get hold of a copy. I didn't have to play the game itself, my boys said, but there were some great online games to be played.
Well, that was true the online maps and games were brilliant with excellent graphics.
Then my youngest son suggested that I had a go at the story mode. The memories of the original gameplay made me hum and haw a bit. Anyway, I gave it a go and discovered that I was still playing online with them. This way they got me through the first couple of chapters.
I wound up completing the story mode - most of it solo.
What struck me about Gears Of War 3 were several things.
The first was the interaction of the characters. The constant banter between the Australian sounding Samantha Byrne and technician Daniel Baird. The brashness of devil may care former Thrashball player, The Cole Train compared to the cautious youngest member of Delta Squad, Jace Stratton. And, at their head, Sgt Marcus Fenix with his friend and second in command Dominic Santiago. Of course, no team is complete without a 'love' interest - Lt Anya Stroud the former controller of Delta Squad and now very hands on.
The action begins aboard the helicopter carrier 'Sovereign' which comes under attack by the Locust Horde who are now backed up by a new enemy known as the Lambent. This as the Chairman of the Coalition Of Ordered Governments (COG for short) turns up. He is wounded in the attack and hands Marcus Fenix a disc that contains vital information and reveals that Marcus's father was not dead but very much alive and held prisoner on the island of Azura.
And so the intrepid magnificent seven take on all kinds of 'baddies' and obstacles to reach this island that is protected by a vortex. The only way to acheive this is to go in underwater. To do this they need both fuel and a submarine.
The squad are aided in their quest by Dizzy Wallin - this grey haired, grizzled old man has no love for the COG. He was one of the millions left to die when the Chairman unleashed a powerful weapon to destroy the enemy. With great respect for the members of Delta Squad who helped to rescue him and his family Dizzy takes the role of their combat engineer.
There is a sequence in the Chapter titled 'Ashes To Ashes' that underlines that back story as the Squad enter the city of Char. Bodies and scenery that echo both the destruction of Pompeii and Hiroshima.
Gears Of War 3 is not really the normal kind of third person shooter. The gamer is not alone. The other characters act both independently and as a team. They, like the main character, kill the enemy and, unlike many other games, run out of ammunition and need help.
The most important factor here is that there is a strong story to tell here. Characters are fleshed out so that when one of them sacrifices himself for the team you feel their grief and understand all the factors that make him do it.

Well, the story is the work of English author Karen Traviss who, I suspect, has used her Territorial Army training amongst other things to bring in that feeling of men at women at war.
Karen Traviss has written some of the Star Wars Republican Commando and Clone Wars novels. She has also written four of the Gears Of War novels with a fifth 'The Slab' due out in May 2012.

All in all I have to say that this is one of the best games that I have played in a long time. So, yes, I'm going to take another shot at 1 and 2.
This also comes with downloadable content and I can say that the 'Shadow Of Ramm' is value for money in as much as this is another game.
And no glitches or bugs - well only the bugs you kill.
Posted by Ray at 00:22