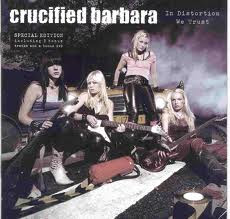 Back in 1998 four young ladies in Stockholm, Sweden got together to form a punk rock band. By 2004, though, they had found their true calling in the world of heavy metal.
They are Mia 'Coldheart' Karlsson - guitar and lead vocals; Klara 'Force' Ronnqvist Fors - Guitar and Backing Vocals; Ida 'Evileye' Stenbach on Bass and drummer Jannicke 'Nicki Wicked' Lindstrom.
As a vocalist Mia Coldheart can kick ass and knows how to do it soft. Check out songs like Play Me Hard, My Heart Is Black or Bad Hangover on YouTube.
To date there have only been two albums - 'Til Death Do Us Party' and 'In Distortion We Trust'. It was from this latter album that they released their debut single 'Losing The Game' that peaked at no 8 on the Swedish charts.
Though they have, for the most part, toured in Europe and Scandinavia they did a gig with 'Motorhead' down in Folkestone, Kent and, later, recorded 'Killed By Death' on a Motorhead tribute album.
They are, currently, working on their third album.
For those with a liking for Heavy Metal then this all girl group is worth checking out.
Posted by Ray at 02:09