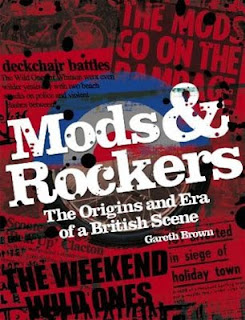 1964 was a year without much news. Well, there was the Alaskan earthquake; an American warship was attacked by three torpedo boats off the coast of North Vietnam; the price of beef had shot up; Archbishop Makarios of Cyprus was 'shopping' for arms and Kruschev was in the selling business of arms to Egypt.
Only one of these stories would, eventually, erupt into headline news - Vietnam.
But for most of 1964 all these stories would be squeezed aside for the home-grown war between the Mods and Rockers on the beaches of Clacton, Brighton, Margate and Hastings.
And therein lies a bit of irony.
Part of the reason that the Marlon Brando movie 'The Wild One' was banned in the U.K. was because it showed two gangs meeting up in a small American town for a fight.
Therefore, to discourage impressionable teenagers from copying this the powers that be thought it best that we did not see it.
Well, there you go.
'Mods & Rockers: The Origins and Era of a British Scene' by Gareth Brown does a pretty good job of back-tracking this very British phenomenon to the early days of Rock 'n' Roll and the Teds along with the emergence of the teenage culture.
Like the splitting of a single cell the Mods and the Rockers emerged from the Teddy Boy era.
On the whole Gareth Brown's book is an informative excursion into the background of two clashing cultures. However, the book falls into two mythological traps.
The first is the musicality of the era.
Here Gareth Brown cites R & B and the Tamla Motown sound as Mod music and pure Rock 'n' Roll to the Rockers. Music of the period was universal. Martha and The Vandella's 'Dancing In The Street' is one example that got air time in Rocker cafes.
And Rockers would stomp with gusto the The Honeycombs' 'Have I The Right'.
The Beatles, too, played Rock 'n' Roll music.
In 1963 two songwriters, John Lennon and Paul MacCartney, wrote a ballet score that was performed by the Darrell Western Theatre and Ballet Company. It was called 'Mods & Rockers - a take on Romeo and Juliet.
The other trap was that Mods and Rockers simply hated each other.
OK, so Rockers thought that Vespa's and Labretta's were a bit effeminate - hair dryers is the name that we gave them. Yet, the mods had to be admired for the work they put in on them. Mirrors, headlights and the chrome work - they personalised their scooters.
The 'hate' was engineered. Hindsight makes things clearer.
Before Clacton the press made a big deal out of the mods. Their dance moves; how clean they looked and how mods came from the middle-class and worked in offices etc. Whereas, the Rocker was dirty, greasy, lower class and all out villains - if the press were to be believed.
Of course, when everything kicked off, the press painted both sides with the same brush.
While the Rocker tradition lives on it has to be said that the Mod culture died within a year of the battles on the English beaches. Yet without them there would not have been a very British scenario and one that would change everything from attitudes and the very freedoms that we have today. Though there are times when I think that, maybe, we also got some things wrong.
For a good insight into the history of these two cultures then Gareth Brown does a pretty good job. Like The Beatles ballet this piece of English history is overlooked even by the media that created it - guilt perhaps?
The book is published by Independent Music Press at £12.99 - or at HMV for £6.
Posted by Ray at 11:35

Labels: Mods and Rockers:The Origins and Era of a British Scene - Gareth Brown