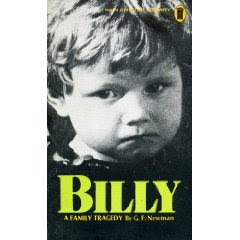 First published by New English Library in 1971.
This novel comes from the pen of G.F.Newman better known today as the creator of the BBC series 'Judge John Deed'.
'BILLY' is the kind of book that even the faint-hearted should read.
The story opens with neurosurgeon David Bray operating on the brain of a child injured in a car accident. An act that is significant as saving lives has become his top priority since the death of his own child. Work is his way of escape and as much as he loves his wife, Margaret, they are drifting apart.
Their lives are far apart from the squalor of Abbyn Road where 4 year old Billy and his 6 year old sister, Judith, live.
Their father is workshy and only rolls out of bed when the pubs open. And their mother is just as bad as she screams at her husband about the state of the place that she is too lazy to clean up.
Young as she is it falls to Judith to 'mother' Billy by making sure that he is fed even if the only food in the house is a loaf of bread that has been nibbled at by rats.
Billy's young life is spent wandering the streets and playing in the rubble of demolished buildings until Judith comes home from school. It is too traumatic to stay indoors for it is a place of violence.
One night the father returns home drunk as usual. He has got into a fight and lost which puts him in an even worse mood. When he trips over an oil can in the kitchen he knows who is to blame - and who is to blame for all his problems. He storms into the children's room and lashes out at Billy. He picks him up and shakes him and throws Billy back on to the bed.
A concerned nieghbour plucks up the courage to call the police.
An indifferant policeman arrives and enters the children's bedroom. It is at this point that the reader 'sees' the bloody carnage that has taken place and it has an impact. What went before does not prepare the reader for this.
Billy is in a serious condition and it is neurosurgeon David Bray who fights to save his life. The full tension of the operation is there right to the bitter end.
The parents are sent to prison and it would be easy to say that is the end of it - but there are those who do not learn their lesson and they know who to blame for what has happened to them.
Along the way the work of the NSPCC (National Society For The Prevention Of Cruelty To Children) is highlighted. An organisation that, despite the odds against them, made a better job of it than the modern Social Services.
This book is not a good read - not in the accepted sense. Billy's story doesn't make for comfortable reading but it is compelling and very emotive.
A book that shouldn't be forgotten but re-issued.
Posted by Ray at 01:06

I am so happy you're back. Yay!

Sounds like one of those books that should be required reading. Thanks for telling us about it, Ray. I take it that it's a UK book - I don't recall this ever being published in the U.S.

Who can resist that face? Strangely I woke up after nightmare about child abuse this morning. Maybe it was that face.

Thanks, Patti - it's good to be back. Sorry about the nightmares.

Laurie - I don't know much about the book's publishing history. But, yes, it is a British book - though the story is global.

This one sounded so interesting I had to order it. And I also am glad Broken Trails is back in business.

Patti i'm glad you like the face of the lad on the front of Billy as it is my younger brother.mind you he is 44 now & not so irresitable.

Recently I purchased a copy of this book and found it very compelling reading. In fact I had difficulty putting the book down! One thing I will say is that the storyline and details in the book differed considerably from Play for Today's dramatisation of the story as I remember it. In the dramatised version it is more about "family life gone wrong" than continuos abuse or neglect and the family based in a high rise flat. After attacking his son, Bryant gets a two year prison sentence and his wife gets a probation/community order. I don't recall anything in the film which suggested that Billy went blind either. Also I recall that in the film version the family get back together - with a little Social Service help - and the parents decide to behave responsibly. If I remember rightly Jimmy doesn't die at the end. What dies is the cruelty and neglect to which the children had previously been subjected.