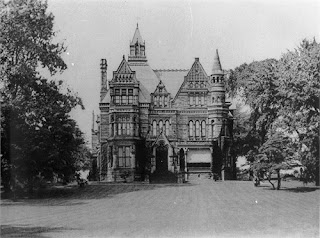 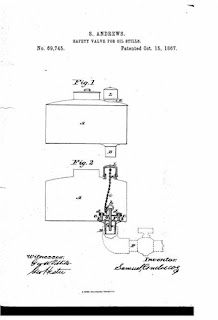 Samuel Andrews was a candle maker born in Oaksey, Wiltshire but he was a technical genius who was set to change the face of America's oil production.

He arrived in America prior to the Civil War and settled in Cleveland, Ohio where he married Mary Cole in Cuyahoga County in 1859.

While working with shale oil production in the newly discovered oil fields of western Pennsylvania in 1862 he came up with a way to separate the different components of crude oil. This became known as fractional distillation.

Looking for investment for his ideas Samuel Andrews approached a local businessman, John D. Rockefeller, who saw a lot of potential in them. With investment Samuel Andrews designed and built a small refinery in Cleveland.

So was born Standard Oil which was destined to make Samuel Andrews a fortune. To show off his new found wealth he built a mansion on Euclid Avenue aka Millionaires Row but it was over ambitious and unmanageable that it was left empty and derelict for 25 years before the bulldozers moved in. All that remains is a photo.

However, not all went well between Andrews and Rockefeller. Rockefeller took the credit for marketing that capitalised on Andrews' ideas but Samuel was not comfortable with the aggressive way that the company was growing. Finally, Samuel Andrews sold out his share of Standard Oil in 1874.

He was not a poor man when he died in Atlantic City, New Jersey in 1904.

Normally I would have ended this biography there - but there is a tad more to add.

As stated Samuel Andrews was married to Mary Cole who's brother John married Sarah Howe. Sarah Howe had a sister Hilary who had married Henry Griffiths. Henry Griffiths owned and ran a general store in Elyria, Lorain County, Cleveland. To cut a long story short Henry and Samuel were, for a better word, brothers in law.

As it turns out both John D.Rockefeller and Samuel Andrews had a love of fishing and both would visit Henry Griffiths who had a small fishing lodge.

The reason for this post-script draws a line under an old saying of my grandfather who, on being asked for a loan, would answer 'Who do you think I am? John D. Rockefeller?'

Add to that Henry Griffiths is my three times great uncle and Samuel turned up as past of his history and I am indebted to the Stokes family for that.
Posted by Ray at 12:40